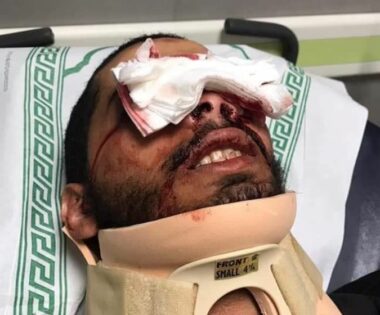 The Palestinian Red Crescent Society (PRCS) has confirmed that Israeli soldiers injured overnight 205 Palestinians, including some who were injured in the eyes, during protests that erupted after dozens of soldiers and police officers invaded the Al-Aqsa Mosque, in occupied Jerusalem. The soldiers also abducted and detained many Palestinians.

The PRCS said some of the wounded Palestinians suffered injuries to their eyes, including one who was injured in both eyes, in addition to others who were shot in the genitals.

The latest escalation started on Friday evening during the Iftar, when dozens of soldiers surrounded the al-Qibli mosque, in the Al-Aqsa compound, and cut the electricity before firing gas bombs, concussion grenades, and rubber-coated steel bullets at the Palestinians, including the elderly, children, and women.

The soldiers also attacked the clinic of Al-Aqsa and fired gas bombs at worshipers in Bab ar-Rahma mosque.

The soldiers also attacked dozens of Palestinians in several parts of East Jerusalem, including Bab Hotta and Bab al-Amoud.

In addition, the soldiers assaulted Palestinians and international peace activists in Sheikh Harrah, after isolating it, and allowed groups of colonists to invade it.

The soldiers also assaulted and abducted dozens of Palestinians, including a photojournalist identified as Mahmoud Ma’tan, who was detained for several hours and was released after the Police impose a fine on him and forced him out of Jerusalem.

Many journalists were also assaulted by the soldiers and the police, including Abdul-Afo Bassam and Mohammad Abu Sneina.

It is worth mentioning that Israeli sources said seventeen soldiers were injured during the protests in Sheikh Jarrah and the Old City.

On Saturday at dawn, the soldiers stormed and ransacked many homes in Jerusalem, and attacked dozens of Palestinians near Al-Aqsa Mosque, before abducting at least thirteen Palestinians.

The invasions of homes largely took place in the Old City, the Suwwana neighborhood, Ras al-Amoud, Silwan, and al-‘Isawiya.

The soldiers also invaded the home of Mohammad Mahmoud in al-‘Isawiya to abduct him but he wasn’t home.