Father And Mother Of Slain Child, Found Under Rubble Of Their Home In Gaza 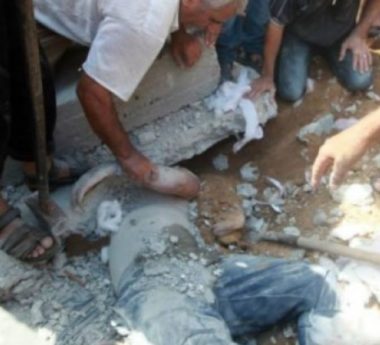 The Palestinian Health Ministry has reported, Sunday May 5th, that the corpses of a Palestinian man and his wife, were found under the rubble of their home, which was bombarded by the Israeli army, leading to the death of their child.

The Ministry said the corpses of Talal ‘Atiya Abu Jedian, 46, who worked as a security guard at the al-Awda Hospital, and his wife Raghda Mohammad Abu al-Jedian, 40, were buried under the rubble of their bombarded apartment at a residential tower in Beit Lahia, in northern Gaza.

Their corpses were recovered hours after the bombing, and were transferred their corpses to the Indonesian Hospital, in northern Gaza Strip.

It is worth mentioning that their child, Abdul-Rahman Talal Abu Jedian, 12, was instantly killed after Israeli missiles struck Residential Tower 12 in Sheikh Zayed City, in northern Gaza. Palestinians killed by Israeli army fire in May