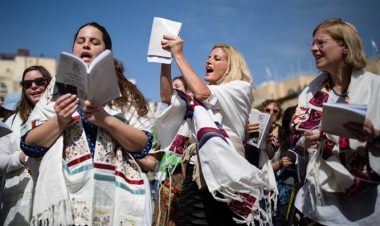 A group of Israeli Jewish feminists called the ‘Women of the Wall’ held their monthly prayer service at the ‘Western Wall’ in Jerusalem on Friday, and were assaulted by a group of right-wing religious Jewish zealots who threw stones at the women, beat them, and burned their prayer books.

The women were challenging what they see as misogynist practices within the Jewish tradition, and during their prayer service they wore the yarmulkes and traditional prayer shawls usually reserved for men in the Orthodox Jewish tradition.

Around 200 women gathered in prayer at the Western Wall to mark the beginning of the Hebrew month of Av, according to Israeli media sources. The Western Wall Heritage Foundation, which disapproves of the women’s interpretation of religious practices, had guards and police surround the area, but did not attack the women.

Instead, when the women left the Wall plaza, they were attacked by several dozen Orthodox Haredi men, who punched and hit the women. One young women was brought to the hospitl with head and neck injuries. She reported to Israeli reporters that a medic told her that if she had been hit a centimeter to the left, her neck could have snapped.

The injured woman told reporters that her boyfriend called the Israeli police, ho asked “Who attacked you?”, and when they told the police that it was a group of Orthodox Haredi Jewish men, the police responded, “It’s not Arabs? We’ll send someone later”. The police never sent anyone to respond to the call.