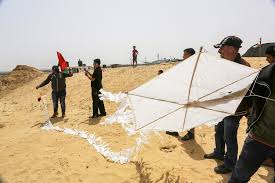 Israeli forces carried out airstrikes in northern Gaza on Sunday, a day after a ‘ceasefire’ was declared between Israel and the Palestinian Authority governed by Hamas in the Gaza Strip.

According to Israeli media sources, the floating of kites bearing flames have started a number of fires on Israeli agricultural land in recent weeks. But local sources say that dry conditions are contributing to the fires, and the ‘incendiary kites’ are unlikely to be the sole source of conflagration.