First-ever Bill on Palestinian Human Rights Introduced in US Congress 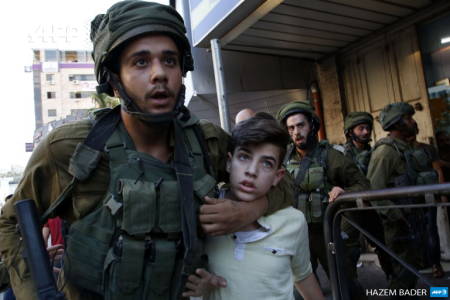 Washington, D.C., November 14, 2017—Members of Congress on Tuesday introduced a bill in the House to prevent U.S. tax dollars from paying for human rights violations against Palestinian children during the course of Israeli military detention.

The Promoting Human Rights by Ending Israeli Military Detention of Palestinian Children Act requires the Secretary of State to certify annually that no funds obligated or expended in the previous year by the United States for assistance to Israel have been used to support the ill-treatment of Palestinian children detained by Israeli forces from the occupied West Bank. The legislation leaves financial assistance already committed in place.

An estimated 10,000 Palestinians between the ages of 12 and 17 in the West Bank have been subject to arrest, detention, interrogation, and imprisonment under the jurisdiction of Israeli military courts since 2000. This bill was drafted in response to widely documented rights violations carried out by Israeli military and police against children within the military detention system, including torture or cruel, inhumane, or degrading treatment.

“Despite ongoing engagement with UN bodies and repeated calls to abide by international law, Israeli military and police continue night arrests, physical violence, coercion, and threats against Palestinian children,” said Khaled Quzmar, general director of Defense for Children International – Palestine. “These practices remain institutionalized and systemic rather than last resort measures, and we call on the U.S. to halt its support of these violations.”

The bill aims to establish, as a minimum safeguard, a U.S. demand for basic due process rights for and an absolute prohibition against torture and ill-treatment of Palestinian children arrested and prosecuted within the Israeli military court system.

Israel has the dubious distinction of being the only country in the world that systematically prosecutes an estimated 500 to 700 children each year in military courts that lack fundamental fair trial rights and protections.

In 590 cases documented by DCIP between 2012 and 2016, 72 percent of Palestinian child detainees reported physical violence and 66 percent faced verbal abuse and humiliation.

DCIP found that 568 out of 590 child detainees underwent interrogation without the presence of a family member. Under Israeli military law, Palestinian children have no right to a lawyer during interrogation. Confessions that are often coerced through ill-treatment, that in some cases amount to torture, are routinely used in military courts to sentence children to jail time.

In every annual report on Israel and the occupied territories released since 2007, U.S. authorities have openly acknowledged the prevalence of torture and ill-treatment of Palestinian children and the denial of fair trials rights in the Israeli military detention system.

In 2013, UNICEF released a report titled Children in Israeli Military Detention: Observations and Recommendations. The report concluded that “ill-treatment of children who come in contact with the military detention system appears to be widespread, systematic and institutionalized throughout the process.”

Despite sustained engagement by UNICEF and repeated calls to end night arrests and ill-treatment of Palestinian children in Israeli military detention, Israeli authorities have persistently failed to implement substantive reforms to end violence against child detainees.