More Palestinian Land to be Seized for Settlement Expansion 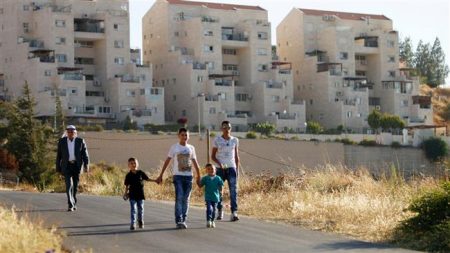 Israeli military authorities notified Palestinian farmers, on Tuesday, that they intend to expropriate plots of land near the village of Shofeh, to the southeast of Tulkarem.

The farmers told WAFA that the Israeli military informed the Palestinian liaison office that, by doing so,  it intends to to open roads and build playgrounds and other recreational facilities for the benefit of the illegal Avnei Hefetz settlement.

The farmers, who expressed real concern over the decision that would rip them of the land that is their only source of income, said they were given 60 days to appeal the decision at Israeli courts.

They said they have the papers to prove their ownership of the land even though they do not expect the Israeli courts to be fair to them.

The military seized village land in March, to build a power station for the settlement and an industrial area.

In February of 2017, the Israeli Knesset passed a controversial law that would legalize the expropriation of privately-owned Palestinian land for the benefit of the Israeli settlement enterprise in the occupied Palestinian territories.

Jordan Valley: 300 Palestinians to be Evacuated for Settlement Expansion