Five Days after Demolition: Picking Up the Pieces

Palestinian flags fluttered over the rubble of Mohammad al Dababsh’s home in the South Hebron Hills, this week, as local activists helped the family put up a temporary shelter.

Pots and pans lay scattered amongst bricks, metal and dust – the only remnants left of the two-roomed house which was demolished on Monday.

ISM joined activists from the Protection and Sumud committee – a group that protects locals from attacks by settlers – to the village of Khalet al Dabeh where they helped the Dababsh family to erect a tarpaulin tent.

The house was the first of four homes to face the bulldozers on June 17, as occupation forces went on a demolition spree across two villages, as reported by ISM.

ISM spoke to Jaber Dababsh, the brother of Mohammad, about the impact the demolition has had on his family.

“They are completely destroyed because they lost everything at once – their electricity, their home, their stuff,’ Jaber Dababsh replied, through a translator.

“The situation is very hard. Now they’ve got this tent and, hopefully, they can move in it soon because all their stuff is outside and, mostly, they are outside.” 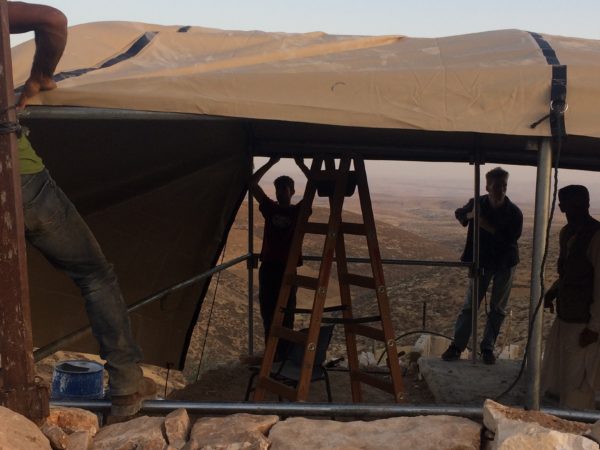 Villagers, local activists and ISMers erect a tent on the site of a demolished home in Khalet al Dabeh.

The tent was cold and dark, the solar panels that once supplied energy to the house now destroyed and confiscated by soldiers during the demolition. In stark contrast, the illegal settlement of Havat Maon glared in the distance. ‘The settlers have big homes, running water and electricity,’ a member of the committee told ISM. ‘This family just has a tent.’

During Monday’s demolition, a member of the al Dababsh family broke through the closed military zone around his house in a desperate attempt to save it. He was aggressively pushed back by Israeli border police who threw him to the floor. He was later hospitalized.

Jaber told ISM that workers who had been removing his family’s possessions from the house just before the demolition stopped when his brother ran through the closed military zone. This meant many of their belongings were left in the house when the bulldozer ripped into it, including the children’s school bags and books. 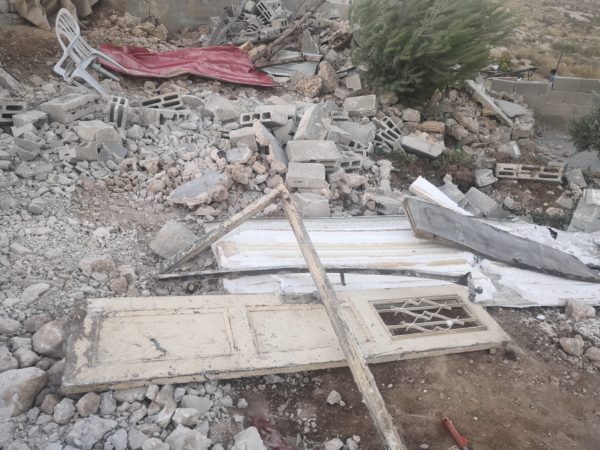 The door of the al Dababsh home demolished this week.

Even the tent is not safe from the occupation forces. Tents put up to shelter families after demolition are also routinely confiscated by the Civil Israeli Administration.

ISM asked what the family would do if the tent was taken.

‘We will stay here,” Jaber replied. “We will put up another one. This is not something that will surprise us, it’s something we expect to happen under this occupation.

“This is their [Israel’s] thinking, to make us get out of the village. It’s been five days since the demolition and they [the al Dababsh family] are still here, living outside.” 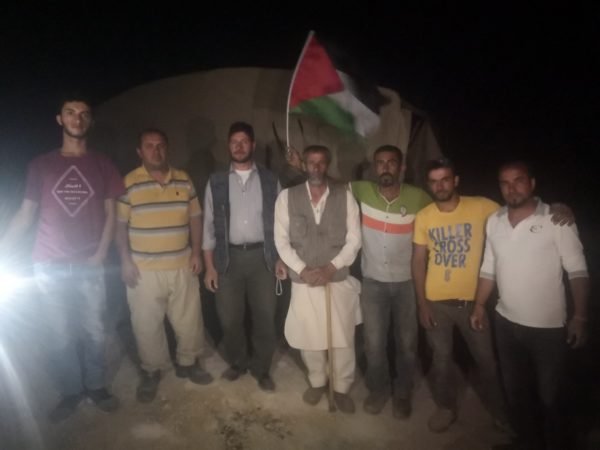 Villagers and members of the Protection and Sumud committee pose with a Palestinian flag outside the newly constructed tent.

Palestinians in the South Hebron Hills are denied access to running water, electricity and permits to build new structures – including schools and medical centres – by the Israeli occupation. As a result most of 30 villages in the area are at risk of demolition.

Despite being deprived of their human right to shelter, the al Dababsh family remained defiant.

“If you demolish, we will build, if you uproot our trees we will plant more.” This is the family’s message to the occupation.