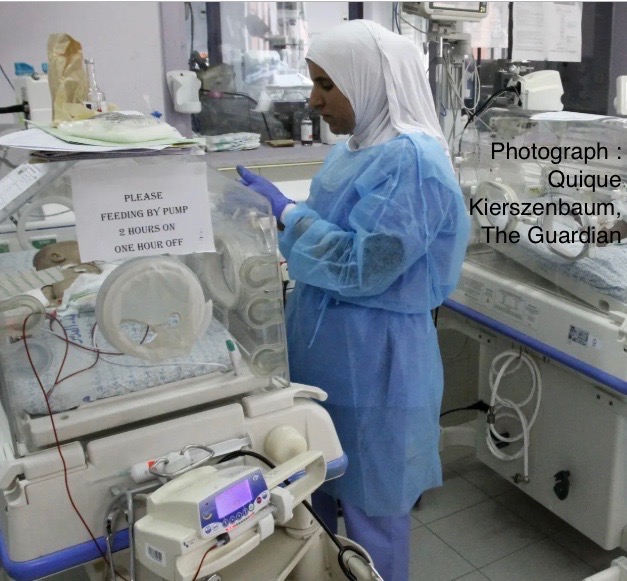 Palestinian infants brought from the besieged Gaza Strip, to Jerusalem’s Makassed hospital are, according to the U.K.’s Guardian, must endure their hospital stay alone, and their families suffer from afar.

Medical grounds may compel Israel to allow a critically ill patient to travel to Jerusalem for more specialized care, but not necessarily for parents of sick newborns.

According to information provided by the Makassed hospital, since the beginning of 2018, of 56 acutely ill babies, transferred from Gaza, to the Jerusalem hospital, 6 passed away, alone, with no parent present.

The story of Hiba Swailam, 24, mother from Gaza, gave birth to very premature triplets in Makassed hospital in Jerusalem, 2 of the tiny infants weighed less than a kilogram each.

When Hiba’s travel permit expired, she was required to return to Gaza. At nine days old, one of the smallest triplet passed away, with no family member present.

The hospital broke the news of the second newborn’s death at 23 days old, by telephone. Another infant died alone, the same mother, forced to mourn her infants’ deaths for life.

The surviving triplet, Shahad, nurtured in the beginning by the hardworking nurses, her mother, was only able to see her daughter via video calls, and despite being ready for discharge, family members had to wait for a permit to leave Gaza.

Israeli medical non-profit organization, Physicians for Human Rights-Israel, reported that more than 7,000 permits for minors from Gaza were issued in 2018, while less than 2,000 permits for parents were granted. This statistic alone, leaves a dire impression of the needless torment inflicted on the families of Gaza.

Mor Efrat, the group’s director for the occupied Palestinian territories, was quoted saying “the Israeli government should be held accountable for the human suffering”.

Since Donald Trump cut millions in medical aid to hospitals serving Palestinians in occupied East Jerusalem, the hospital has experienced many difficulties.

The nurse in charge at the Paediatric Intensive Care Unit (PICU), in Makassed hospital, Ibtisam Risiq, relates the psychological effect of newborns living without parents present, asserting that these fragile infants “need love”.

The illegal blockade on Gaza, Israel claims, is to prevent Hamas and other resistance groups from launching attacks on Israel, while the United Nations calls it “collective punishment”. The 2 million Palestinians inhabiting Gaza are under siege, cut off from the West Bank, deprived of the Freedom of Movement.

The Makassed hospital serves Palestinians in the West Bank, whom also find it difficult, or impossible, to get to the hospital.

UK-based health charity, Medical Aid for Palestinians, have given British MPs tours of Makassed hospital in an effort to expose the results of separating children from their parents.

Rosena Allin-Khan, a UK Labour member of parliament (MP), and former emergency doctor, who visited the East Jerusalem hospital, says she has been demanding the UK government to intervene. She declared that “no child, anywhere in the world, should be alone in their time of greatest need,” concluding that, “the UK government must lean on Israeli authorities to overhaul this inhumane system.”