Flags, Spirits High as Week of Action in Hebron Comes to Climax 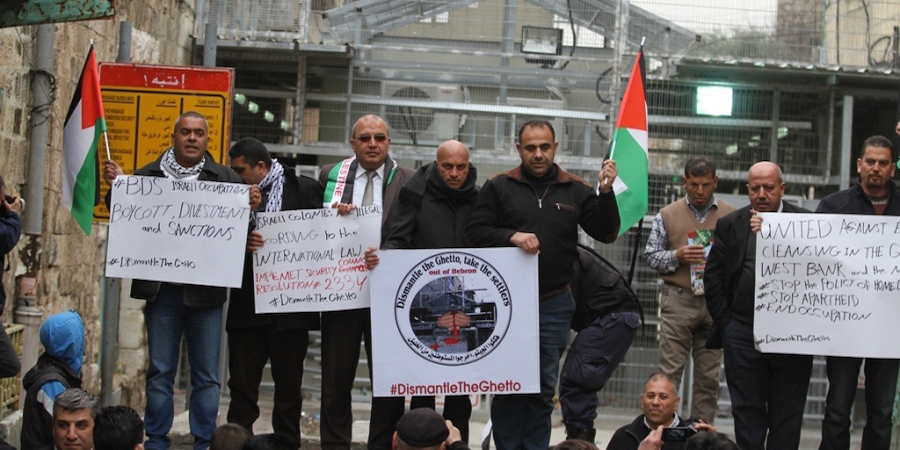 Dozens of Hebron residents and local activists gathered at the entrance to Shuhada Street on Wednesday to hoist and release a Palestinian flag over the main commercial thoroughfare in Hebron. A checkpoint and electrical gate tightly control Palestinian access to Shuhada Street, while armed settlers are able to walk in the area freely.

This activity, one of three that day in Hebron, is part of the week of action taking place under the banner “Dismantle the Ghetto, Take the Settlers out of Hebron.”

Human rights defender Bade Amr explained, “this activity is to say loudly…we will continue struggling against all Israeli human rights violations that result from the closing of spaces in Hebron.”

Hisahm Sharabati, the coordinator of the Hebron Defense Committee (HDC), called upon the people present as well as activists around the world to participate in the final demonstration of the week on Friday.

As HDC activists let their flag fly into the clear skies Wednesday, members of the group Youth Against Settlements (YAS) successfully raised the Palestinians flag on a high pole too near Ramot Yishai settlement and Tel Rumeida neighborhood in Hebron. The Palestinian High Commission against the Separation Wall and Settlements also was present.

YAS also organized a pop-up vegetable market inside Shuhada Street to draw attention to and push back against settler and government control over the occupied area.

Residents gathered to buy produce from the makeshift market. Some settlers and Israeli occupation officers tried to stop the action, but Palestinians and many internationals, primarily from the U.S. organizations CODEPINK and Veterans for Peace, resisted their efforts.

Issa Amro of YAS said the activities Wednesday are reminders that Hebron is a Palestinian city and the settlers should leave it. He also called for wide participation in the Friday protest.

The three protest actions are part of the 23rd marking  of the 1994 Ibrahimi Mosque Massacre in Hebron. Palestinian political parties, civil society groups, local committees, human rights organizations, as well as international and Israelis activists united for the occasion this year.

Israeli forces responded to the first protest of the campaign outside of the Ibrahimi Mosque with physical violence on demonstrators on February 17, 2017.

The Ibrahimi Mosque Massacre took place on February 25, 1994, when the American-born doctor and Israeli settler Baruch Goldstein opened fire on Muslim worshippers in the Ibrahimi Mosque, killing 29 Palestinians and injuring 150 others.

The Israeli government subsequently instituted severe restrictions on Palestinian movement in downtown Hebron, including eventually prohibiting Palestinian foot traffic on Shuhada Street, near where the Mosque is located. Settlers’ access to the religious site and presence in the city has only increased since 1994.

Today, the Palestinian population in the district of Hebron is approximately 150,000. About 50,000 Palestinians live in the downtown area, which faces daily human rights violations by settlers living in five small outposts. Thousands Israeli soldiers stationed inside and around the outposts allow hundreds of settlers to continue to colonize the heart of Hebron at the expense of the indigenous Palestinian population.

Coordinator of HDC Hisham Sharabati emphasizes that the campaign calls for Israeli authorities to recognize and abide by international law, which forbids collective punishment as well as the construction of Jewish-only colonies in occupied Palestinian territory.