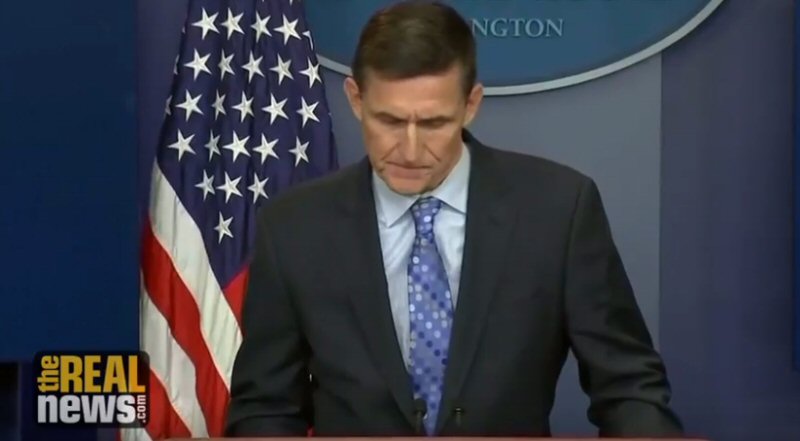 Michael Flynn’s guilty plea to lying to the FBI falls short on Russia “collusion” but points to the Trump administration acting on Israel’s behalf, says author and journalist Max Blumenthal.

Max Blumenthal is an award-winning journalist and bestselling author whose articles and video documentaries have appeared in The New York Times, The Los Angeles Times, The Daily Beast, The Nation, The Guardian, The Independent Film Channel, The Huffington Post, Salon.com, Al Jazeera English and many other publications. His most recent book is Goliath: Life and Loathing in Greater Israel. His other book, Republican Gomorrah: Inside The Movement That Shattered The Party, is a New York Times and Los Angeles Times bestseller. Max is co-host of the podcast Modern Rebel.

Aaron Mate: It’s the Real News. I’m Aaron Mate. Michael Flynn, the National Security Advisor to Donald Trump until his ouster just a few months into his administration, has pleaded guilty to lying to investigators looking into alleged Trump Russia ties. Flynn is the most high level member of the White House inner circle to be indicted and he is said to be cooperating with investigators. And the news has been greeted across liberal media much like it was today on the TV program The View.

Joy Behar: Oh my God. Oh, breaking news. ABC news Brian Ross is reporting. Michael Flynn promised full cooperation to the Mueller team and is prepared to testify that, as a candidate, Donald Trump directed him to make contact with the Russians. Yes.

Aaron Mate: But for opponents of Donald Trump, is Flynn’s indictment really something to celebrate? Well, joining me to discuss is Max Blumenthal, Senior Editor of Alternet’s Grayzone Project. Max, your reaction to Flynn’s indictment today.

Aaron Mate: Right. In terms of what it says about the actual election, which is purportedly the reason why we’re supposed to be caring about Russia and Trump. The first conversation between Flynn and Kislyak happens in December, so well after the election has happened. Let me ask you Max, it’s interesting to see that the outrage today has been over, as you mentioned, Flynn trying to negotiate or make overtures to Russia over matters that could actually deescalate tensions, which, when not viewed through a partisan lens, could be seen as positive because it’s deescalating tensions with a nuclear power, and as you said, trying to find an end to the horrific Syrian War. But, in effect, both those things were known about before. What was not known, at least to my knowledge, was the extent to which Flynn was working to subvert the U.N. Security Council vote about Israel. And it’s surprising, as you alluded to, that that’s the issue that is both new but yet has not elicited very much outrage or attention.

Max Blumenthal: Yeah, I mean, that’s just absolutely shocking that, I mean, and this has also come out through Mueller’s investigation is that Jared Kushner may have violated the Logan Act by conducting freelance diplomacy to work with the Israeli government to attempt to convince other governments to vote against the U.N. Resolution. Other governments on the Security Council. That’s how we know that Kushner was the one who was encouraging Flynn to make this call. And it’s just completely overlooked in Washington, it’s overlooked by mainstream media, not only because of the fear of that very government and it’s cut outs in Washington attacking figures in the media and attacking public figures for daring to point to Israeli influence as a nefarious and nefarious force that contravenes American interests, but because it’s a matter of American policy to allow Israel to dictate our policy with respect to the Middle East.Including in Syria and so you have elements that are deeply embedded in the national security state that have been hostile to deescalating the Syrian Civil War. These elements, you know, you could point to John Brennan from the CIA, one of his babies was the arm and equip operation to train and arm Syrian rebels who were substantially operating under the umbrella of al Qaeda, referred to as the Free Syrian Army, something that we now know was basically a mythical conglomeration of Salafi and Salafi jihadi rebels. And in 2015, when al Qaeda Syrian affiliate, Jabhat Al Nusra, took the city and the province of Idlib, in northeastern Syria, which was just a few hundred kilometers … actually I would just say, you know, a few scores of kilometers away from the Alawite Heartland. An area which al Qaeda and it’s affiliates have pledged to cleanse of non-sitting Muslims. To kill or convert the minority population of Syria.Where Christians were forced to convert or die in Idlib. Where the Jewish population in Idlib was forced to dig up their own shrines. Christians were slaughtered across Idlib. And the Syrian government panicked. You know, what Obama should have done at that point is gone to the city allies, Turkey, Saudi Arabia, Qatar and said, “Stop arming these jihadist rebels who have taken Idlib, let’s put a stop to this, this is crazy, they wanna march on Lattakia, they wanna move to Damascus and this would destroy a core country in the Middle East. It’s gone too far.” He didn’t do that. The arms continued to flow.This should have been a signal moment and that is when, in fact the arms continued to flow in the form of something like 20,000 Tow Missiles produced by Raytheon which allowed al Qaeda and it’s allies to destroy entire Syrian Army Tank Divisions. This is when the Syrian government called on Russia to intervene. And it was that Russian intervention that prevented Syria from becoming what we see today in Libya, where there are open air slave markets, where there have been the slaughter of the black population of Libya and now we see sub-Saharan African migrants being sold in open air slave markets. Refugee crisis like you’ve never seen before. This is what Russia prevented in Syria. And the U.S. by 2016, after the fall of Aleppo, or the liberation of Aleppo with Russian help, the liberation from al Qaeda and it’s allies, kind of started to get wise and decided it’s time to deescalate.John Brennan was very unhappy with this scenario, his operation was being discredited. His legacy was on the line. A lot of other figures coming out of the state department were upset at this scenario but the Trump administration was determined to do this and that’s what Flynn’s phone call with Kislyak partially dealt with and it has happened. We’ve seen deescalation zones set up around the Golan Heights, all across the [crosstalk 00:15:26]

Aaron Mate: Max, let me cut in there because we have to wrap, but I wanna say actually, that it’s quite possible that what Trump and Flynn are being faulted for now, in terms of Syria, is exactly what the Obama administration, despite people like John Brennan, would have done anyway. Because, as you say, the war was going so bad for them that it was obvious that they were not gonna win the outcome that they pursued. But let me ask you, Max, because we only have one minute, so getting back to Flynn and this indictment, people are saying, “Well look, why would Mueller make a plea deal with Flynn unless Flynn had something to offer him that was gonna flip and point to someone higher above him like Kushner, or even Trump, that’s possible. It’s also possible that maybe this is all Flynn has and so now they’re gonna get him on lying to the FBI so I’m wondering, where you think this is gonna go and what kind of punishment you think someone like Flynn will face? I mean lying to the FBI is a serious offense but it’s nowhere near the kind of offense of treason that many people have floated throughout this whole Russia-gate “scandal”.

Max Blumenthal: Yeah. Even though the indictment contradicts the narrative of collusion in Russian subversion of our shining democracy, the narrative will continue and this gives more fumes to the narrative in the way the mainstream media, corporate media’s gonna report this will be slightly distorted. It will obfuscate the details of the indictment. I can only go based on what’s in the indictment and it seems to show that Flynn lied to the FBI, he probably pled out on part to protect his son Michael Flynn Jr. from being, you know, indicted, or called in. And to the extent that he is going to say that Trump ordered him to make this phone call, well, the question is how does that demonstrate any illicit behavior by Trump if Trump himself was urging Flynn, who was his future National Security Council Advisor, to conduct diplomacy with Russia?I mean Flynn’s mistake was to make the phone call in the Cayman Islands where the NSA could pick up the cables and listen to the phone call and his other mistake was to lie to the FBI time and time again. Just being a serial liar. So that’s it from what I can see and from the standpoint of someone trying to prove Trump Russia collusion, or the overall narrative of Russia-gate, this one is another dud.

Aaron Mate: Leave it there. Max Blumenthal is Senior Editor of Alternet’s Grayzone Project, also the current host of the podcast, Moderate Rebels. Max, thank you.

Max Blumenthal: Thanks for having me.

Aaron Mate: And thank you for joining us on the Real News.