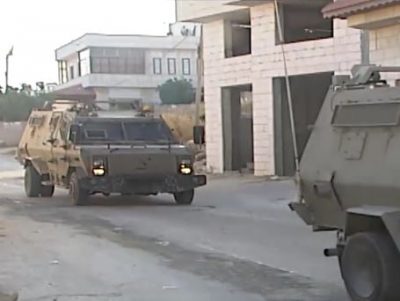 Following a stabbing and shooting attack in occupied East Jerusalem on Friday, 16 June 2017, that resulted in the killing of three Palestinian youngsters and an Israeli female soldier, the Israeli forces imposed additional collective punishment measures against the Palestinian civilians in occupied Jerusalem and later in Deir Abu Mash’al village, northwest of Ramallah, from which the three youngsters come.

They banned the Palestinians from entering and exiting the Old City and obliged the commercial stores’ owners to shut down otherwise they would pay a fine of over NIS 40,000.

The Israeli forces also erupted metal barriers in the streets leading to Bab al-Amoud and prevented vehicles from using these streets. The Israeli officers chased the civilians who were at Bab al-

The Israeli officers chased the civilians who were at Bab al-Sahera (Herod’s Gate), al-Mesrara and Nablus Street and fired sound bombs at them. Moreover, they assaulted some civilians and pushed the journalists away from the scene.

The Israeli forces mobilized all over Jerusalem, mainly the streets of Nablus, Bab al-Sahera, Sultan Suleiman and al-Mesrara. Israeli forces stopped the by-passers and checked their IDs and then deported the West Bank residents by buses distributed throughout the city. The Israeli police declared they “Deported over 350 Palestinians, who entered Jerusalem without permits, and returned them to the Palestinian territories”.

In the same context, after the identities of the three Palestinian youngsters, who carried out the stabbing and shooting attack, were disclosed, Israeli forces moved into Deir Abu Mash’al village, northwest of Ramallah, from which the youngster come. They closed the main entrance by establishing an iron gate and closed the roads with sand and rocks, isolating the village from the world.

According to PCHR’s investigations, at approximately 05:30 on Saturday, 17 June 2017, Israeli forces moved into the said village and imposed a curfew.

The Israeli soldiers accompanied by an engineering team raided the houses belonging to the families of the three attackers and surveyed them. Before

The Israeli soldiers accompanied by an engineering team raided the houses belonging to the families of the three attackers and surveyed them. Before withdrawal, the Israeli forces handed over the owners of the houses decisions to demolish the houses without mentioning the date. The killed youngsters, whose family houses were raided, were identified as:

Furthermore, Israeli forces raided, searched and damaged the contents of dozens of houses belonging to relatives of the attackers and confiscated permits they had to Israel.

In the meanwhile, a number of youngsters gathered in the center of the village and threw stones and empty bottles at the Israeli soldiers, who immediately opened fire in response.

PCHR condemns the Israeli government’s measures against the Palestinian civilians in occupied East Jerusalem and Deir Abu Mash’al village, northwest of Ramallah, which fall within the collective punishment policy that is internationally prohibited, especially under article 33 of the Fourth Geneva Convention, and: