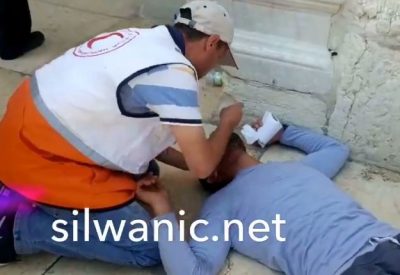 Israeli soldiers, including undercover officers and groups of colonialist settlers, continued their invasions and provocative tours into the courtyards of the Al-Aqsa Mosque, in occupied East Jerusalem, while the soldiers also attacked and injured many worshipers.

The invasions took place after the soldiers opened the al-Magharba Gate, allowing large groups of settlers into the holy site, while dozens of soldiers, including undercover officers, invaded the compound and surrounded the Muslim worshipers.

The invasions were mainly focused in the al-Qibli mosque, when more than 250 officers stormed the Al-Aqsa Mosque compound, especially the gates of Al-Qibli mosque, and fired many gas bombs and rubber-coated steel bullets on the worshiper.

Sheikh Omar al-Kiswani, the head of the Al-Aqsa Mosque, said the soldiers injured at least three worshipers, after assaulting them with clubs and batons, and used pepper-spray against many others, wounding three.

Al-Kiswani held Israel responsible for the escalation against the mosque, especially during the holy Muslim month of Ramadan, by conducting these invasions, and allowing provocative tours by dozens of extremist colonists into the holy site.

He added that the soldiers are deliberately provoking the worshipers by these invasions and acts, an issue that could lead to further violence and serious escalation.

The head of the Islamic Waqf Department and Jerusalem Affairs, Sheikh Azzam Khatib, said the Israeli police allowed dozens of settlers to invade the courtyards of the holy site, without any prior notice, especially after opening the al-Magharba Gate to allow these tours.

He added that, for so many years, the al-Magharba Gate remained closed during the last ten days of Ramadan, yet, the police opened them, and invaded the holy site.

One officer was also injured, with a stone that struck his head, before Israeli medics provided him with the needed treatment and took him to a hospital.