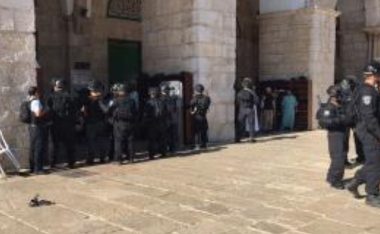 Undercover Israeli officers invaded, on Sunday morning, the Al-Qibli Mosque, of the Al-Aqsa Mosque Compound, and smashed its doors, before invading it, and clashed with many local youngsters.

The undercover officers invaded the mosque while Israeli soldiers and officers occupied its rooftop, while many Palestinians were detained and interrogated in the mosque compound, as the soldiers investigated their ID cards.

The attack led to scuffles and clashes between the invading Israeli forces and dozens of worshipers, while the soldiers also abducted an international pilgrim in the mosque.

Furthermore, the soldiers assaulted many worshipers, including the head of Al-Aqsa Mosque, Sheikh Omar al-Kiswani.

Israeli sources said one officer was injured in the head after a Palestinian stuck him with an iron chair in the head, during the military invasion.

In related news, dozens of extremist Israeli colonists, accompanied by dozens of soldiers and officers conducted provocative tours into the Al-Aqsa compound.

Dozens of soldiers are still surrounding the holy site, and are preventing the Palestinians from entering or leaving it.

It is worth mentioning that the Palestinian department of Waqf and Endowment has repeatedly warned that such invasions into the holy site will only lead to further tension and violence, especially during the holy Muslim month of Ramadan.