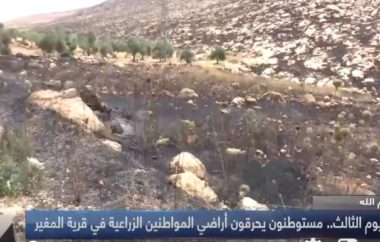 The colonists invaded large areas of farmlands and orchards, and burnt more than 100 trees, owned by members of the Na’san family, the Palestinian TV has reported.

The family said they planted the trees on their own lands more than ten years ago, and has been since then tending to their orchards and fields despite the Israeli restrictions and constant violations, especially since they are in Area C of the occupied West Bank, under full Israeli control.

Palestinian firefighters tried to reach the lands, but the Israeli military restrictions prevented them from performing their duties.

Many villagers rushed to the lands to help the family, and managed to extinguish the fire using branches and sticks, preventing it from spreading to more lands, including wheat fields.

The Palestinian farmers in the area told Palestine TV that they would never abandon their lands and orchards, despite the constant Israeli attacks, including burning the lands and uprooting the trees.