US Ambassador Claims Israel Has ‘Right’ to Annex West Bank 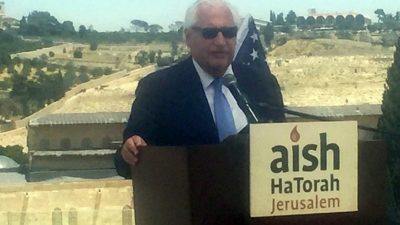 David Friedman, the current U.S. Ambassador to Israel and former Trump bankruptcy attorney, stated Saturday that he thinks Israel has a right to take over the Palestinian territory of the West Bank – despite international law which prohibits land annexation through military force.

In an interview with the New York Times, Friedman stated, “Under certain circumstances, I think Israel has the right to retain some, but unlikely all, of the West Bank”.

The West Bank refers to the area west of the Jordan River which Israel occupied by military force in 1967 and has retained military control over since that time. It is one of two Palestinian areas under Israeli military occupation – the other is the Gaza Strip. Israel has also illegally occupied the Golan Heights, which is part of Syria, since 1967.

Friedman blamed the Palestinian leadership for Israel’s ongoing military occupation of their land, claiming that the Palestinian Authority had “turned down” some “extremely generous offers” from Israel – although the only ‘offers’ that had been presented would deny Palestinians their internationally-recognized right to sovereignty, self-determination and freedom of movement.

Palestinian Authority Spokesperson Ibrahim Milham responded to the claim, saying “Friedman’s statements are a direct violation of international legitimacy resolutions and are parallel with the illegal Israeli policies. These statements prove that Friedman is the ambassador of colonization and hostility targeting the Palestinian rights, including the right to self-determination and independence.”

Milham added that, “This shows how one of the world’s biggest countries has its foreign policy determined by people who are politically immature and extremist in their ideologies, such as Kushner, Greenblatt and Friedman. These men are playing politics as if they are in a circus.”

Friedman has long been a supporter of Israeli colonial settlements, heading up the Zionist organization Friends of Bet El, which funds settlements constructed on stolen Palestinian land, while he was working as a bankruptcy lawyer prior to his appointment as Ambassador to Israel.

His ambassadorship was opposed by dozens of Jewish groups in the US, including the liberal J Street, which stated at the time, “David Friedman, President Trump’s nominee for US Ambassador to Israel, is a leading supporter of the settlement movement who lacks any diplomatic or policy credentials. He has attacked fellow Jews and public figures with hateful accusations that should disqualify him from representing our country in any capacity, never mind in one of the region’s most sensitive and important diplomatic posts.”

In his interview Saturday, Friedman also stated that even if peace is achieved, the Israeli military would need to continue its military occupation of the West Bank.

Saeb Erekat, the chief Palestinian negotiator, said this would constitute an “annexation of occupied territory, which is a war crime according to international law.”