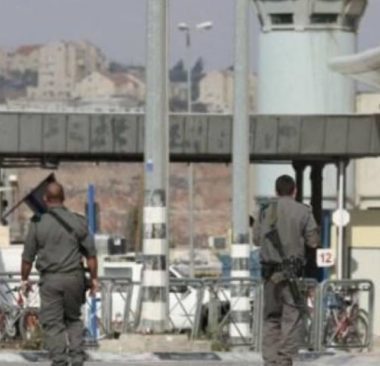 Israeli soldiers abducted, Saturday, a young Palestinian man near Bethlehem, and a young woman at Qalandia terminal, north Jerusalem, in the occupied West Bank, in addition to preventing farmers from entering their lands near Nablus.

The Bethlehem office of the Palestinian Prisoners’ Society (PPS) said the soldiers invaded Khalayel al-Louz area, southeast of the city, and abducted Yousef Nour Abu Srour, 24, after storming his home and searching it.

In addition, the soldiers abducted a young man at the Qalandia terminal north of Jerusalem, reportedly for carrying a knife in her purse. The abducted woman is from Jenin, in northern West Bank.

In related news, the soldiers invaded Palestinian agricultural lands in Sebastia town, north of the northern West Bank city of Nablus, and forced the farmers out.

The soldiers threatened to confiscate the farmers’ agricultural tools if they do not leave their lands, due to their proximity to the illegal Shavei Shomron colony, which was built on Palestinian lands.

Furthermore, the soldiers assaulted a civilian guard of the Al-Aqsa Mosque, in occupied East Jerusalem, and abducted him.

On Saturday at dawn, the soldiers five Palestinians, including a young woman, from their homes in Jabal al-Mokabber neighborhood, southeast of Jerusalem.