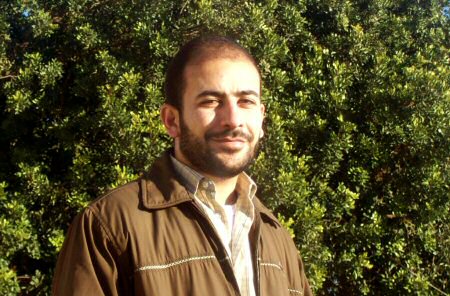 Palestinian prisoner and former long-term hunger striker Ayman al-Tabeesh, 37, imprisoned without charge or trial by the Israeli occupation, has been ordered into isolation on the pretext of being a “security threat.” Al-Tabeesh, from the village of Dura near al-Khalil, has been imprisoned since 2 August 2016 with no charges and no trial on the basis of so-called “secret evidence.”

He has spent nearly 13 years in total in Israeli prisons through multiple re-arrests and has engaged in two long-term hunger strikes to demand his freedom. On Wednesday, 29 November, he was transferred from the Ofer prison to the Ohli Kedar isolation cells.

The Palestinian Prisoners’ Society emphasized that the Israeli occupation intelligence has a policy of isolation and unilaterally isolates many prisoners each year under the pretext of “secret evidence,” the same type of secret file that is used to jail al-Tabeesh. He is one of over 450 Palestinians jailed under administrative detention orders and 6,200 total Palestinian prisoners. In some cases, isolation orders are extended for years without any meaningful reason given to the detained person or their lawyer.

There are currently two Palestinian prisoners in Israeli jails on hunger strike. Ali Barghouthi is on hunger strike for the fourth day; he launched his strike on 28 November in protest of the delay in medical treatment at the Ashkelon prison clinic. Barghouthi has been prescribed to receive a heart test and a CT scan, but the prison clinic has been delaying for over two months. This means that he has received no diagnosis for his ongoing health problems; he is suffering from chest pain and feels tiredness and pain when walking or moving.

Barghouthi, 45, is from the village of Abboud west of Ramallah. He is serving a life sentence for resisting the Israeli occupation as part of the Fateh movement and has been jailed since April 2004.

He joins the ongoing hunger strike of Salah al-Khawaja of the village of Ni’lin in Ramallah, who has been refusing food for 19 days consecutively in protest of his administrative detention, imprisonment without charge or trial. He launched his hunger strike in protest of the renewal of his administrative detention order only one day before his scheduled release.

Khawaja was seized by Israeli occupation forces on 23 July 2017 and ordered to four months in administrative detention, imprisonment without charge or trial. These detention orders are indefinitely renewable; Palestinians have spent years at a time jailed under administrative detention orders. Khawaja is one of over 450 Palestinians jailed without charge or trial and a total of nearly 6,200 Palestinian political prisoners. Over the years, he has spent nearly 12 years in Israeli prisons through multiple arrests and detentions.

He is carrying out his hunger strike despite his own deteriorating health. He walks slowly and has lost significant weight, and he suffers from high blood pressure, diabetes and poor vision in his left eye.