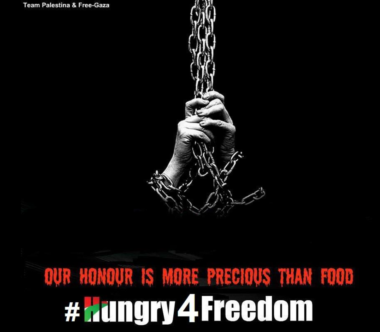 The Palestinian Detainees And Ex-Detainees Committee has reported, Saturday, that four Palestinian detainees are ongoing with the hunger strike, protesting their continued detention under the Administrative Detention orders without charges or trial; one of them started the strike 129 days ago.

The Committee stated that Kayed al-Fasfous started the strike 129 days ago, and is facing serious complications, but is determined to continue the strike protesting his arbitrary detention.

The three other detainees are Hisham Abu Hawwash who started the strike 96 days ago, Ayyad al-Hreimi, 59 days ago, and Luay al-Ashqar who began the strike 41 days ago.

The Committee’s spokesperson Hasan Abed-Rabbo stated that the condition of al-Fasfous is becoming more dangerous due to various complications that could result in a permanent disability and even death.

Abed-Rabbo added that al-Fasfous has blood clots, a significant deficiency of fluids and vitamins, in addition to frequently losing consciousness, and lately became unable to speak without difficulties.

He also said that Israel is refusing to end its illegal use of the Administrative Detention orders, holding hundreds of detainees captive without charges or trial, and called on the International Community to intervene and secure their release.

It is worth mentioning that, on Thursday, detained Ala’ al-A’raj ended the hunger strike that lasted for 103 days, after an agreement was reached to release him in February of the year 2022.