Four-year Anniversary of the Murder of Mohammed Abu Khdeir 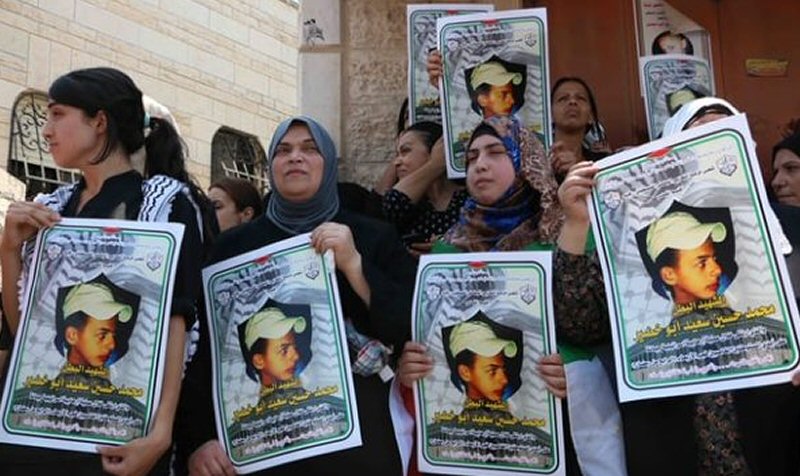 Relatives of Mohammed Abu Khdeir hold pictures of him outside his home in Jerusalem (photo: the Guardian)

The 2nd of July, 2018, marks four years to the day since the kidnapping and murder of Mohammed Abu Khdeir, a 16-year-old Palestinian boy from Shu’fat, East Jerusalem. The shocking nature of his murder and its context, occurring only 6 days before the 2014 Israeli bombing campaigns in Gaza, make it a painful memory for Palestinians.

Mohammed was waiting for friends to eat the pre-dawn meal for Ramadan, and was outside his home at 3:45 in the morning. He was dragged into a car by two or three settlers, screaming, “Father, save me!” The four settlers who took part (two of whom were minors) then proceeded to beat Mohammed, covering him in petrol and setting him on fire. The autopsy confirmed he had inhaled the burning material, confirming that he was still alive when he was set on fire, and that he suffered internal as well as external burns covering 90% of his body.

While many in the Israeli government expressed condolences against the violence, the boy’s family was not yet at an end. His cousin Tariq, a U.S. citizen, was abducted and beaten by Israeli police in East Jerusalem only a few days later. He recalled: “They hit me, and they kept hitting me, and then I fell asleep, and then I woke up in the hospital.” The police said that he had been involved in violence, but journalists noted that there was no mention of this accusation at the court hearing. He was 15 at the time.

While the killers were eventually sentenced (although the minors may be released in under 15 years), the horrific incident must not be viewed as an isolated outbreak. Instead, it should be located within
a collection of sentiments coming from the settler community, the military, the media and the government of Israel. The inevitable result is terrorism against Palestinians. From Mohammed’s killer, Ben-David, to the settlers who spat at the Abu Khdeir family when they arrived for court, to even the Israeli government, the Palestinians and their children continue to be viewed as “little snakes” and “wild beasts”, and legitimate targets for violence. At 16, Mohammed Abu Khdeir was training to be an electrician.

06/23/18 “I just want him to be a normal boy again’: Gaza Family Appeal for Urgent Help to Support Treatment of 11-year-old Mahmoud Who Was Shot in the Face by an Israeli Sniper