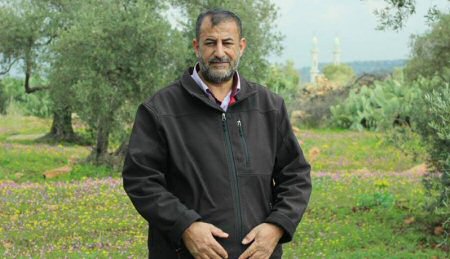 Four Palestinian prisoners are currently on hunger strike in Israeli prison. Salah al-Khawaja, 50, of the village of Nil’in, launched a hunger strike on Monday, 13 November after his administrative detention, imprisonment without charge or trial, was renewed only one day before he was scheduled for release.

Khawaja is also suffering a delicate health condition. Within days after he was detained, he was taken for a heart catheterization procedure at the Shaare Tzedek hospital, where he was told that an open heart surgery was necessary. The Israel Prison Service refused to authorize the operation and his imprisonment without charge or trial, while needing serious health treatment, continues.

He joins three more Palestinian prisoners on open hunger strike – Hassan Shokeh, 29, on strike for 34 days against his imprisonment without charge or trial, and Hamza Marwan Bouzia, 27, on strike for 23 days against administrative detention. Bajis Nakhleh has been on hunger strike for seven days, a strike he launched immediately upon his arrest by Israeli occupation forces on 8 November, only 2 months after his release on 1 September.

In particular, Bouzia and Shokeh have been on hunger strike for an extended period of time, in which they not only are suffering from extensive weight loss, fatigue and pain but also cognitive difficulties. Prior to and after the third week of hunger strike is one of the most dangerous times for a person on strike.