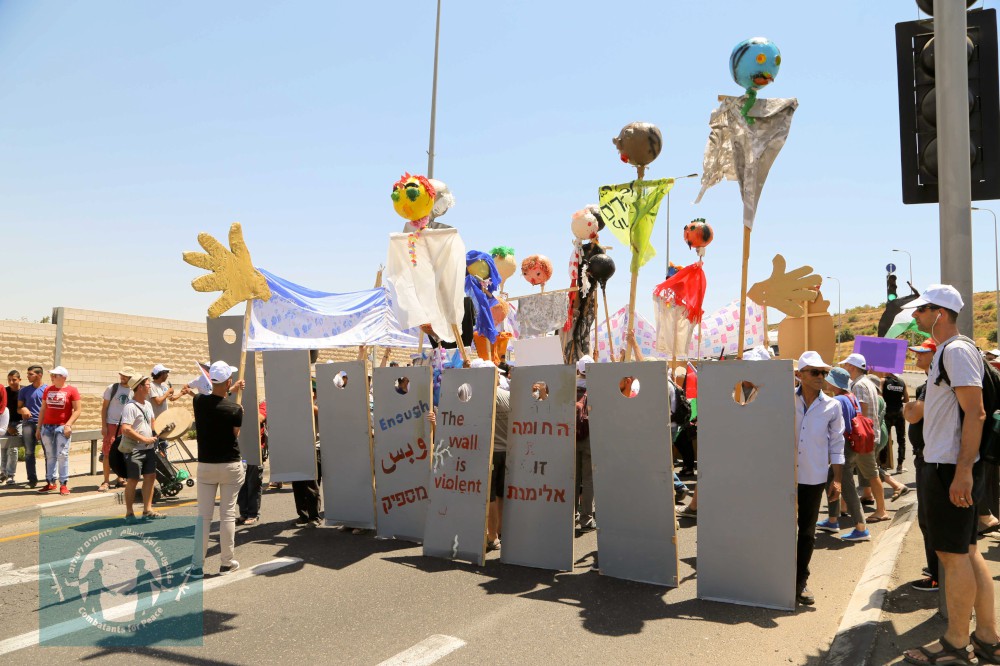 At least 700 Palestinian and Israeli activists and other peace groups marched on Friday at the freedom march to mark the 10th anniversary of founding Combatants for Peace movement. Joining the protest today Alistair Little and Gerard Foster former combatants from both sides of the Irish conflict. The march started from the entrance of Batier village to the south of Bethlehem city. People marched towards settlers road 60 and walked all the way to the tunnel checkpoint separating Bethlehem area from Jerusalem. During the march activists and members of CFP used hand-made poppets to close the settlers road and then used it during the protest as the chanted anti occupation slogans and demanded the end of occupation and the establishment of peace. During his speech at the checkpoint Mr. Ra’ed Haddar, coordinator of the regional groups of CFP, told the gathering” we are here to stay we are not leaving, we do not fear your weapons because we believe in justice and peace.”

From the Israeli side CFP activist Neta Hazan said “ As an Eastern woman , the daughter of Moroccan and Egyptian Jews, I feel that it is my duty to stand by my Palestinian sisters and brothers because their struggle is our struggle we, the Easterners, against repression , denial and towards equality and freedom . ” Gerard Foster  delivered also a speech and said” the fight for peace is a lonely road, sometimes you finds yourselves standing alone, but let me tell you, you are not alone, you  inspire us all.”

At the last speech, Sami Awad, Director of the Palestinian NGO Holy Land Trust, spoke to the Israeli protesters and said ” to those Israelis who are here seeking peace with me because they are afraid of me, and want me to become less of a threat to them, I say go back to your home I do not want your peace. To those Israelis who are here because they believe in Peace, they believe in justices, they believe in freedom and equality, and they are ready to commit to talking and walking this path, I don’t only say welcome,  abut also say my home is yours.”

At the end Mira Awad, a Palestinian Israeli singer preformed a song from the words of famous Palestinian poet Mahmoud Darwish.