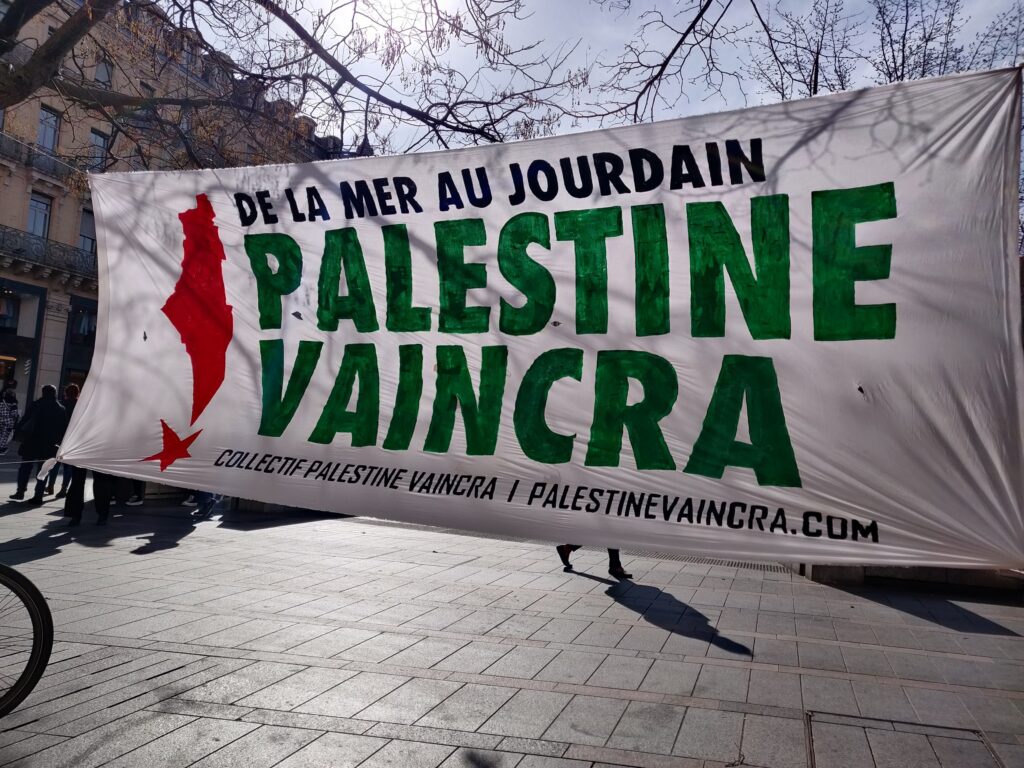 On Saturday, 20 February, a dozen activists and supporters of the Collectif Palestine Vaincra, a member organization of the Samidoun Network, organized a Palestine Stand outside the Capitole metro station in Toulouse, France. They promoted the #BoycottPuma campaign, highlighting the complicity of this sponsor of Israeli apartheid football teams.

Despite strong winds, participants distributed hundreds of flyers calling for a boycott of Puma and had dozens of discussions with passers-by. At the same time, the Collectif Palestine Vaincra booth provided documents with lists of Israeli products to boycott, the situation of Palestinian prisoners and the history of Zionist colonization of Palestine. Many people expressed their interest and volunteered to participate in upcoming initiatives. 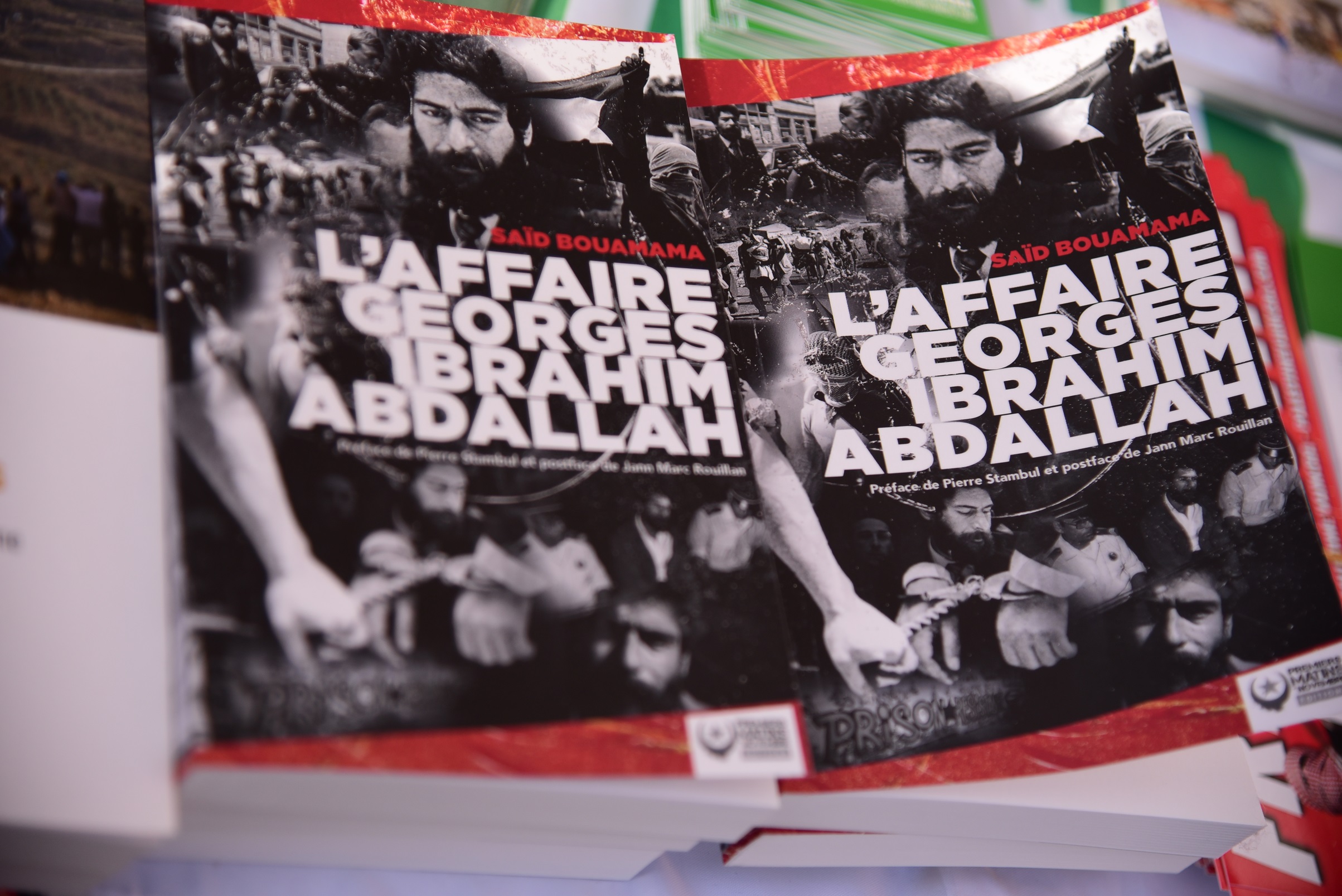 In addition, several people purchased the new book, “The Georges Ibrahim Abdallah Affair” by Said Bouamama, published by Editions PMN. Please contact Collectif Palestine Vaincra if you are interested in buying a copy. A portion of the proceeds from sales will be donated to the campaign to free Georges Abdallah, the longest-held political prisoner in Europe. 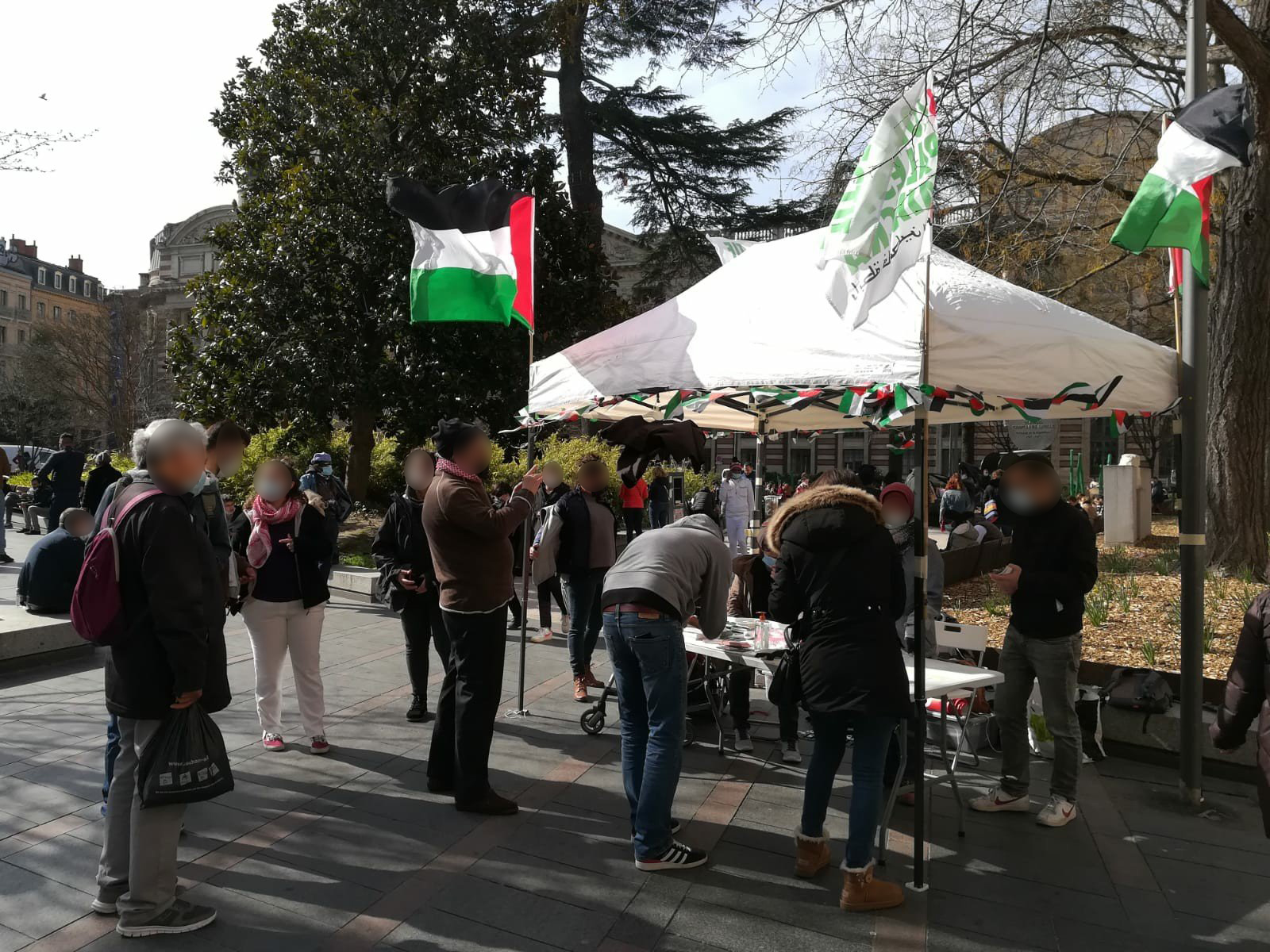 Many passers-by posed for photos to show their support for the global campaign to boycott Israel, solidarity with the Palestinian people and resistance to Israeli apartheid and colonialism.

At the exit to the Capitole metro station, activists displayed a large banner, declaring, “From the river to the sea, Palestine will win.” 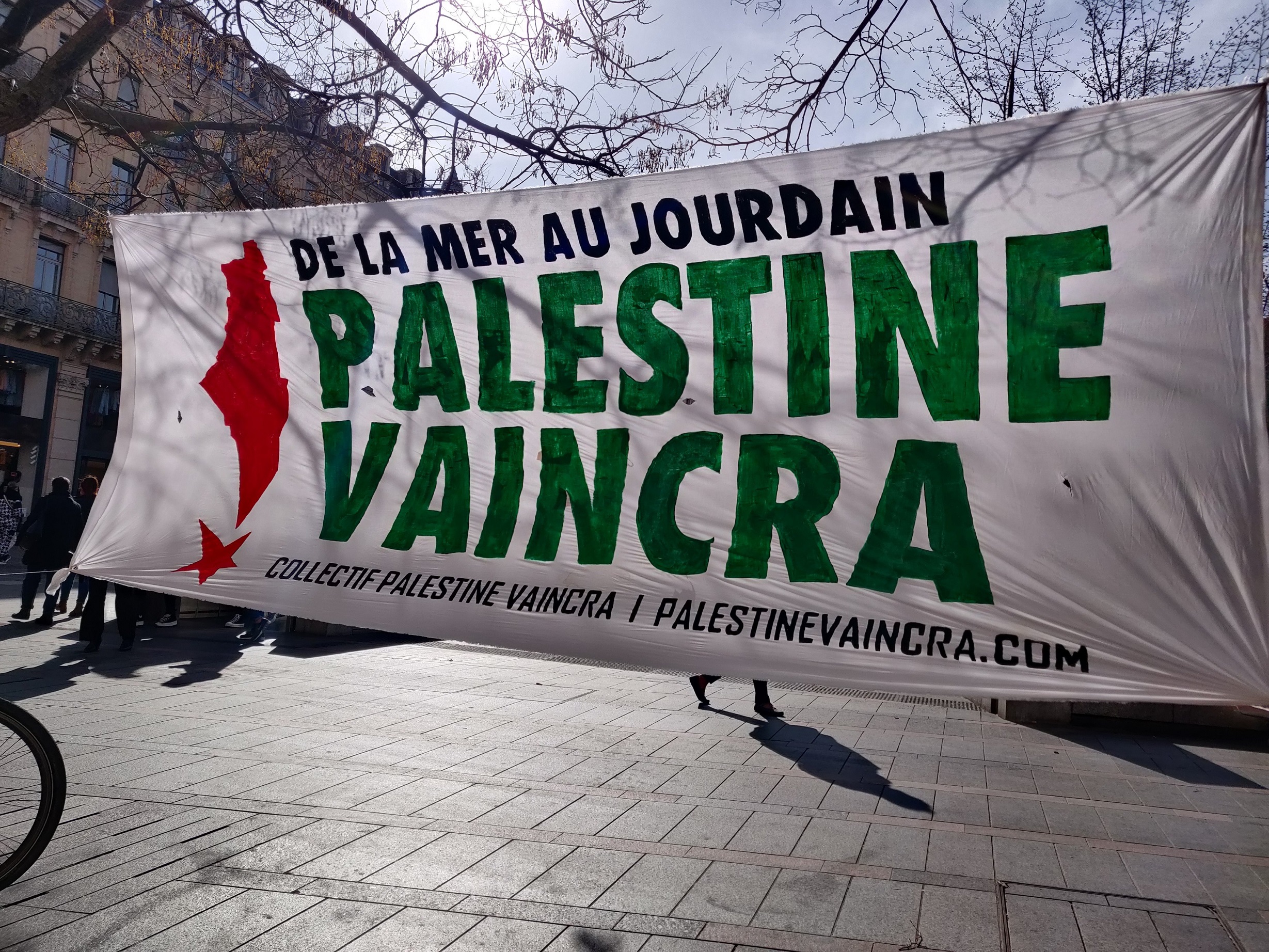 Several activists from Collectif Palestine Vaincra spoke over the sound system in both French and Arabic, describing the Puma boycott campaign and the importance of supporting Palestinian resistance. Many people in the area were interested in the speeches and appalled by the double-talk of Puma, which boasts of supporting human rights in its charter while collaborating with a colonialist and racist state. 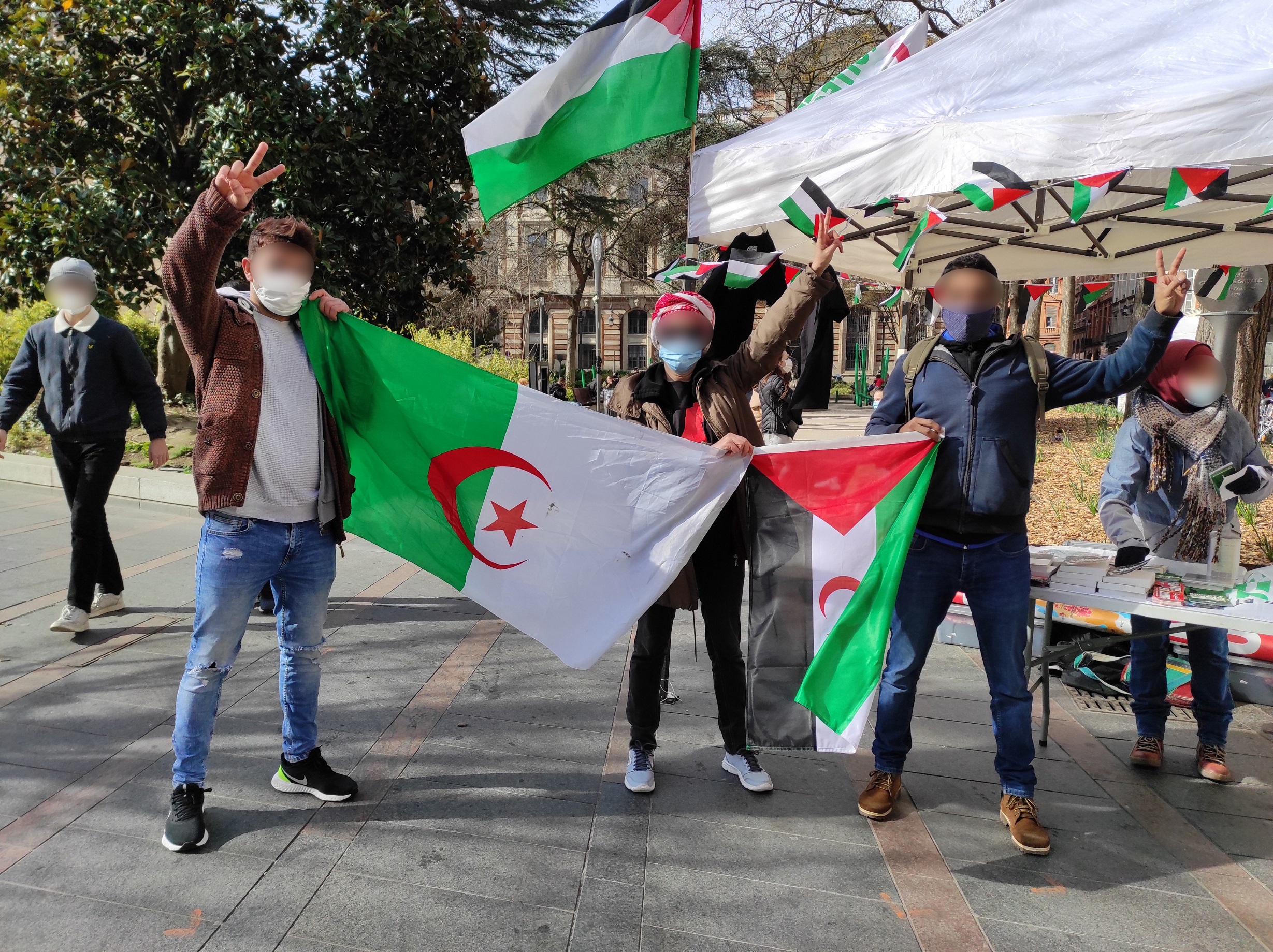 The Palestine Stand ended with the reading of the poem, “The Martyr,” by Abdel-Rahim Mahmoud, and an improvised Dabkeh dance. Participants held up Algerian and Sahrawi flags alongside the Palestinian flag, emphasizing that the Palestinian cause is one of all peoples of the Arab world and, more broadly, of all people who stand for justice and equality. 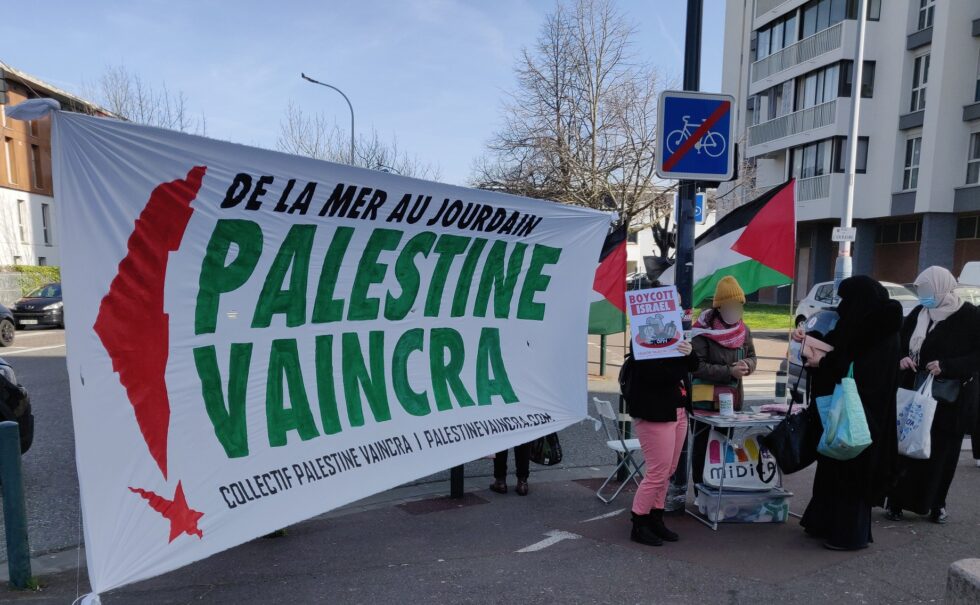 This came one day after another Palestine Stand on Friday, February 19, organized at the exit of Bagatelle metro in Toulouse, during the La Faourette market. Once again, activists displayed a large banner declaring, “From the river to the sea, Palestine will win,” and Palestinian flags, while distributing leaflets on the history of Zionist colonization in Palestine and the importance of developing solidarity with the Palestinian resistance. 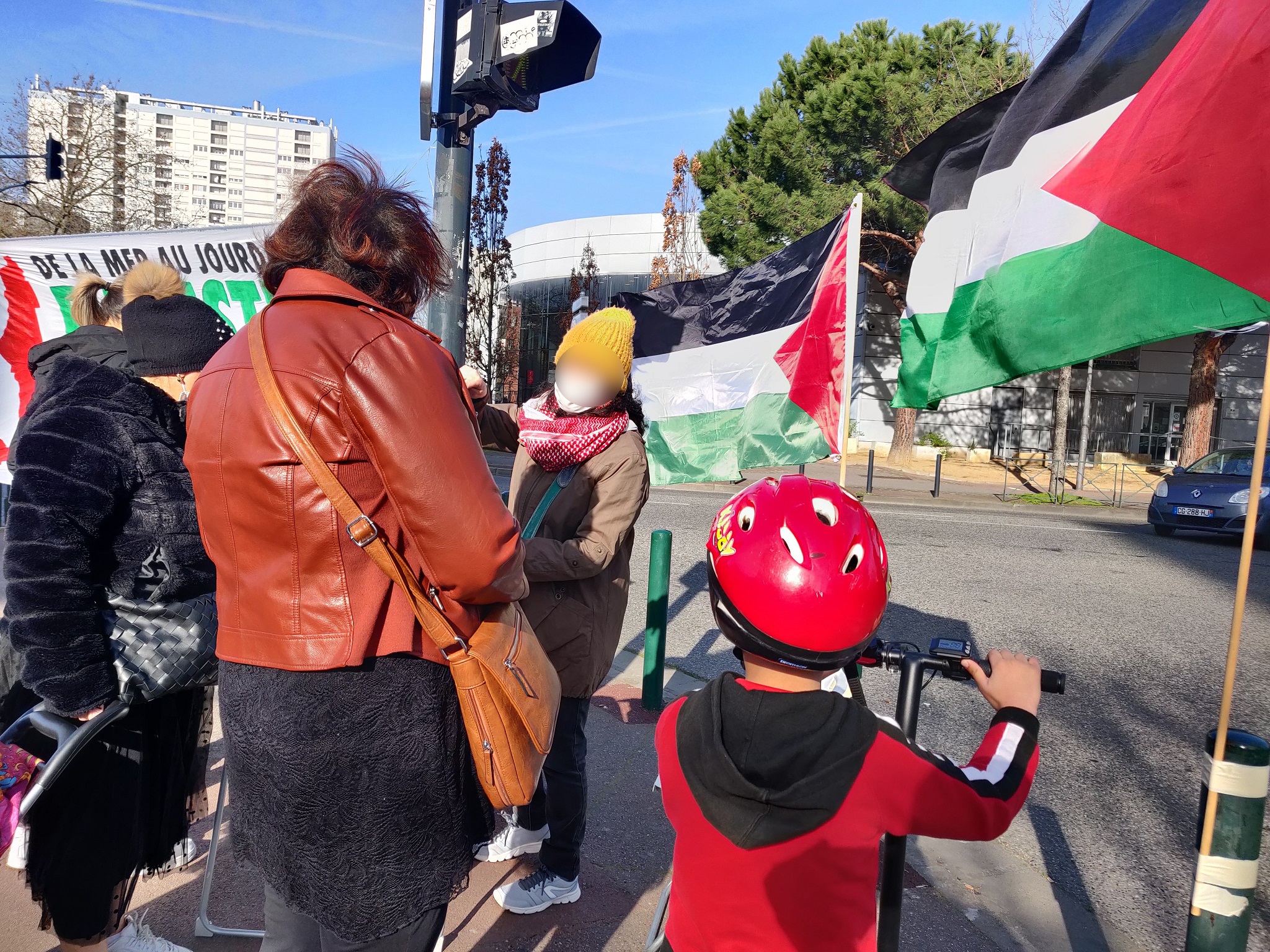 Many passers-by stopped to chat, donate a few Euro or gather material, like information with the list of Israeli products to boycott, or to take pictures in support of the global mobilization to boycott Israel.

**This article reposted from Samidoun.net