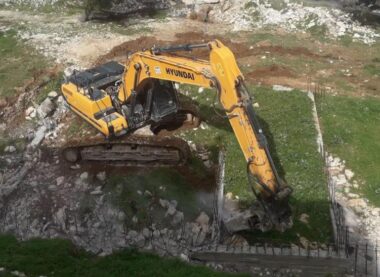 Taiseer Abu Mfarreh, the head of Teqoua’ Local Council, said the soldiers invaded the Khirbat Ad-Deir area, in the northern part of the town, and isolated it from its surrounding areas.

He added that the soldiers then demolished a 160 square/meter under-construction home, owned by Mojahed Mahmoud Salman, under the pretext of being built without a permit from the “Civil Administration Office,” the administrative branch of Israel’s illegal occupation of the West Bank.

It is worth mentioning that Teqoua’ has been subject to constant invasions, including violent searches of homes and property, and the abduction of many of its youngsters, in addition to the repeated closure of its entrances by iron gates installed by the army.