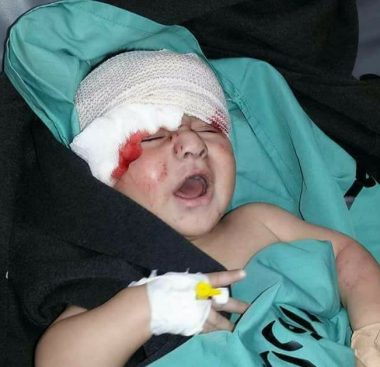 Update: The Palestinian Health Ministry has reported that another Palestinian died from serious wounds he suffered after Israeli soldiers opened fire at Palestinians in northern Gaza.

The Palestinian, identified as Maher Atallah , 54, was shot in northern Gaza on Friday evening, and died from his serious wounds at a local hospital.

153 Palestinians, including an  infant, have been shot and injured, by Israeli army fire in the Gaza Strip alone, Friday, three of them are in serious condition.

Updated (Dec 8, 2017 @ 22:50): Protests grew on Friday throughout the West Bank (including Jerusalem), in Gaza and across the Arab world, against Donald Trump’s Wednesday statement about Jerusalem being the ‘capital of Israel’, effectively denying the basic rights of the hundreds of thousands of Palestinians who live in Jerusalem.

The Ministry of Health in Gaza said one man A 30-year old man, identified as Mahmoud al-Masri,  after the Israeli army fired live rounds at protesters, east of Khan Younis, in the southern part of the Gaza Strip.

It added that 153 Palestinians were injured by Israeli army fire, including three who suffered serious wounds, in several parts of the Gaza Strip.

In related news, the Palestinian Red Crescent said its medics provided treatment to more than than 767 people were injured by Israeli forces on Friday, in several parts of the West Bank and the Gaza Strip.

On Friday at night, at least fifteen Palestinians were injured, including a infant who suffered serious wounds, after the Israeli Air Force fired missiles near Sheikh Zayed residential towers, north of Jabalia refugee camp, in the northern part of the Gaza Strip.

Among the wounded are several elderly Palestinians, who suffered moderate wounds, in in their homes in residential towers and surrounding homes, in Beit Lahia, in northern Gaza.

According to the Palestinian Ministry of Health, the injuries ranged from severe to mild, and included a number of gunshot wounds from live ammunition fired by Israeli troops. Other injuries included asphyxiation from tear gas and injuries from rubber-coated steel bullets.

Protests were held in six areas in the Gaza Strip,  along the border with Israel. Israeli troops attacked all of these protests with live ammunition and so-called non-lethal weapons, resulting in the death of one protester and the critical injury of another. The Israeli military issued a statement, “[Israeli] soldiers are responding with riot dispersal means. During the riots [Israeli] soldiers fired selectively towards two main instigators and hits were confirmed.”

Firing live ammunition at non-violent protesters is a direct violation of international law and the Fourth Geneva Convention.

Tires were burned in the city of Bethlehem, where Christians from around the world had just days ago gathered in celebration of the Christmas tree in Manger Square, the church built on the site where Christians believe Jesus was born. To protest the U.S. President’s statement denying Palestinian rights, Christian leaders in the city decided to engage in a ‘Christmas blackout’ protest, turning off the lights of the Christmas tree and other holiday decorations.

The army used live fire, in addition to rubber-coated steel bullets, gas bombs and concussion  grenades in attacking the protesters. The soldiers and undercover officers also invaded the Bethlehem Arab Society for Rehabilitation, in Beit Jala nearby  city, looking for wounded Palestinians.

In Jerusalem, thousands of Palestinian Muslim worshipers attempted to reach the al-Aqsa mosque, the third-holiest site in Islam, for Friday prayers. Many were blocked by Israeli police checkpoints, and prevented from reaching the mosque.

Protesters gathered outside the Damascus Gate of the Old City of Jerusalem – an area that has been a Palestinian area for over 2000 years, until Israeli settlers began to push out the Palestinian population over the past ten years through violent takeovers of Palestinian homes and apartment buildings, forcing out the Palestinian families who lived there and forcing them into homelessness.

Overnight, at least thirteen Palestinians were abducted by Israeli troops in different areas of Jerusalem and the West Bank, as protests that began Thursday continued through the night.

Around the world, protests continued on Friday, with tens of thousands of people taking to the streets in non-violent marches in Amman, Jordan, in Turkey, in Malaysia, in Istanbul, Turkey and in other cities and towns across the world. At least 10,000 people were estimated at the protest in Istanbul, and more than 5,000 gathered in Kuala Lampur, Malaysia. In Jakarta, Indonesia, protesters gathered outside the U.S. embassy, some holding signs reading “Trump is the enemy of humanity”.

All of these protests were peaceful, and none resulted in injuries, except those in the Palestinian Territories, where the protest marchers were violently assaulted by the occupying Israeli military.