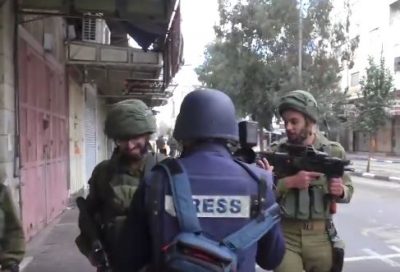 It said that the soldiers shot Omar Abu Awad, the head of Palestine TV office in Jericho, with a rubber-coated steel bullet in his left leg, while reporting on protests, south of the city.

Another journalist, identified as Adel Abu Ni’ma, who works for Reuters, was shot with a gas bomb in the same area. The soldiers also fired many gas bombs and concussion grenades at journalists, north of al-Biereh, in central West Bank, causing Nisreen Silmi, of al-Mayadeen News Agency, and Firas Tannina, of al-Manar News Agency, to suffer the effects of tear gas inhalation, while journalist Ali Dar Ali of Palestine TV, was shot with gas bombs and rubber-coated steel bullets in the head and limbs.

In addition, the soldiers also shot journalist Mahmoud Fawzi, with a rubber-coated steel bullet, after the army assaulted the weekly procession in Kufur Qaddoum, near Qalqilia, in northern West Bank.

In occupied Jerusalem, the Israeli army and police assaulted many journalists in Bab al-‘Amoud, causing various cuts and bruises.

The soldiers also attacked and pushed many journalists in Hebron city, in the southern part of the occupied West Bank, and fired gas bombs and concussion grenades at them.

Another journalist, a cameraman identified as Ahmad Hasaballah, suffered the severe effects of teargas inhalation, east of Gaza City.