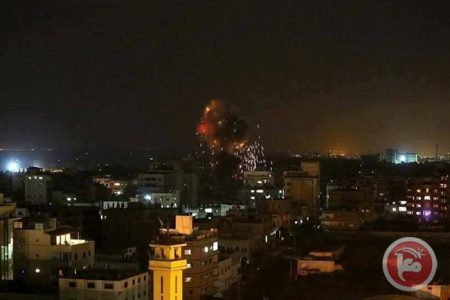 The strikes reportedly come in response to a rocket that landed in an open area in the Ashkelon region of southern Israel, Monday morning.

One airstrike hit agricultural land in the center of Khan Younis, in the southern Gaza Strip. A spokesman of the Gaza Ministry of Health, Ashraf al-Qidra, confirmed that two people were injured in Khan Younis.

According to locals, the airstrikes hit a “resistance” military post as well as an agricultural area east of Gaza City in the northern Gaza Strip, in addition to the al-Shuja’eyya neighborhood in Gaza City, causing damages to several residential buildings.

Palestinian factions released statements warning of the consequences of the ongoing Israeli attacks on the coastal enclave.

A spokesman of Hamas movement, Hazim Qasim, said the current escalation represented “a new chain in the series of ongoing Israeli occupation’s assaults against the Palestinian people and the Gaza Strip.”

The Islamic Jihad movement said, in a statement, that “Palestinian resistance holds the Israeli occupation responsible for the ongoing and future attacks on the Gaza Strip.”

The Israeli army released a statement saying that, on Monday evening, Israeli air forces “targeted three Hamas posts” in the northern Gaza Strip “in response to the projectile fired from the Gaza Strip at Israeli communities, earlier today, and the attack against [Israeli army] forces operating near the border with the southern Gaza Strip as well as other incidents from Gaza in the last month.”

The statement quoted and Israeli army spokesperson as saying that “Hamas is accountable for the unacceptable aggression that threatens the well being of Israelis and breaches Israeli sovereignty. This reality jeopardizes the stability and security in the region. The [Israeli army] will continue to defend Israeli civilians against the threats emanating from Hamas’ Gaza.”

Despite accusations from Israeli army officials that the ongoing attacks on the Gaza Strip are in response to rockets fired from Hamas forces in Gaza, Hamas has yet to claim responsibility for the rocket fire.

Israeli officials have accused Hamas of “preparing” for another war with Israel and have threatened retaliatory measures against the Gaza Strip as a whole.

However, despite Hamas’ inflammatory rhetoric against Israel, the movement has not officially claimed responsibility for any military action from Gaza against Israel since the 2014 war.