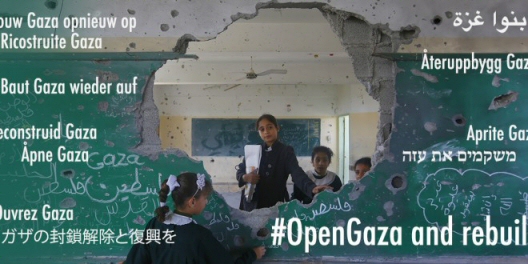 Two years since the outbreak of the 2014 war that cost the lives of 1,492 Palestinian civilians, including 551 children, much of the Gaza Strip remains in ruins. Entire neighborhoods remain cut off from water supplies, destroyed hospitals and clinics have not yet been rebuilt, and tens of thousands remain without a home.

While some reconstruction has progressed, the situation in Gaza remains dire. Less than 10% of the 11,000 homes that were completely destroyed during the 51 day bombardment have been rebuilt. As a result of the war and the impact of the blockade imposed in 2007 by Israel, more than 75,000 Palestinians in Gaza still have no home to return to.

“Two years since the beginning of the war, the blockade is severely impeding reconstruction and recovery in Gaza. Unless it is lifted, Palestinians living in Gaza will be unable to move on with their lives and live in freedom, dignity, and safety,” Oxfam Country Director Chris Eijkemans said, according to the PNN.

“When the ceasefire began, world leaders promised to work towards sustainable and long-term development for Palestinians living in Gaza. However, there is little evidence of those promises on the ground.”

International organizations working in the occupied Palestinian territory are sounding the alarm on the lack of progress in Gaza’s reconstruction as a result of Israel’s heavy restrictions on the entry of materials critical to the recovery process. The organizations called on world leaders to live up to their commitments and press for an immediate end to the blockade.

The almost decade long blockade has crippled Gaza’s economy. Without the ability to sell to external markets, private sector employment has plummeted. Overall unemployment is above 40%, with Gaza’s youth unemployment among the highest in the world.

The impact of the blockade on children is particularly devastating, and tens of thousands of children remain without a home as a result of the 2014 conflict. “Half of Gaza’s population are children, many of whom have lived their whole life under blockade. Hundreds of children requiring vital medical treatment are prevented from leaving Gaza. Two years on, the root causes of their suffering have still not been addressed,” said Fikr Shalltoot, Director of Programmes in Gaza for Medical Aid for Palestinians.

Mr Eijkemans said that lifting the blockade is the only solution to give people access to the basic services they desperately need, to allow reconstruction to proceed in full, and to allow Gaza’s crippled economy to restore.

“The blockade is illegal under international law and amounts to collective punishment of an entire population. Only its immediate end will bring about long-term security for Palestinians and Israelis alike.”

According to UN statistics, Palestinians now make up the largest percentage of refugees in the entire world.