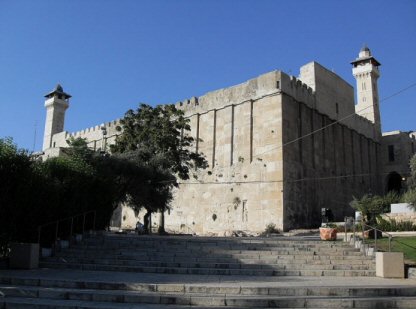 During the last days of the Muslim holy month of Ramadan, Israeli forces have implemented further restrictions in the area of the Ibrahimi Mosque, in occupied al-Khalil (Hebron.) These restrictions deliberately and exclusively target Palestinians in attempts to further cleanse this area of any Palestinian presence. In the days following, Israeli forces at the three checkpoints leading to the area immediately around Ibrahimi Mosque implemented age-restrictions, barring access for any Palestinian between 15 and 30 years old. As these restrictive measures on Palestinians was enforced at all three checkpoints leading to the mosque, it effectively prohibited from anyone in this age group from reaching Ibrahimi Mosque, thus denying them their freedom of religion. In the last few days, a 10-year old Palestinian girl was arrested on settler childrens’ accusations and a Palestinian man beaten up by Israeli forces.

As these age-restrictions, as any other restrictions, are only enforced on Palestinians, they clearly illustrate further the apartheid-measures implemented by the Israeli forces, during the last few days especially around the Ibrahimi Mosque. But this is not just yet another illustration of the apartheid system in occupied al-Khalil, but also the continuous denial of freedom of religion and movement for the Palestinians in attempts to ethnically cleanse the area of any Palestinian presence.

The Cave of the Patriarchs, also called the Cave of Machpelah and known by Muslims as the Sanctuary of Abraham or the Ibrahimi Mosque. According to tradition that has been associated with the Torah, Bible and the Quran, the cave and adjoining field were purchased by Abraham as a burial plot.

On February 25, 1994, Jewish extremist Baruch Goldstein opened fire on a large number of Palestinian Muslims who had gathered to pray inside the mosque. The massacre immediately set off mass Palestinian protests and riots throughout the West Bank, and within 48 hours, nine Palestinian protesters had been killed by Israeli forces. ~Wiki