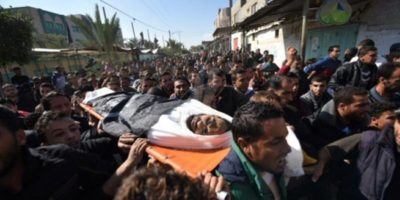 Thousands of Palestinians in Gaza, on Monday, took part in the funeral of seven of their fallen who were killed during Israeli airstrikes on the southern region of the besieged coastal enclave.

Twelve citizens were also injured, some critically, as a result of the firing of more than forty-five rockets, by the occupation army on a group of citizens in Al-Fakhari area, east of Khan Younis, in the southern Gaza Strip.

A state of calm prevails, now, in the border areas of Gaza, ignoring reports of an Israeli military buildup, in these areas.