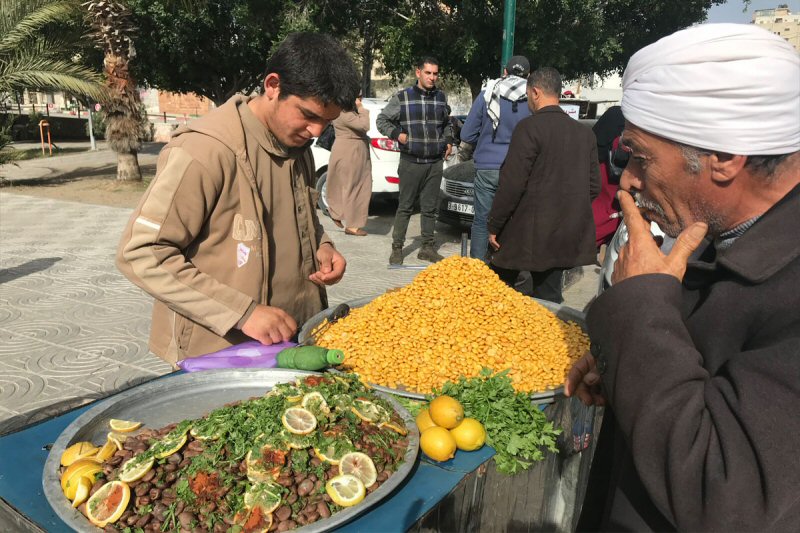 Since October 2017, the knot around the neck of the Gaza Strip has been tightening due to the strict Israeli-Egyptian siege and the punitive measures imposed by the Palestinian Authority (PA), leading the coastal enclave to an inevitable economic collapse.

One day before the start of the second semester, Ahmed, 19, a second-year university student at the faculty of commerce, said goodbye to his friends at the metal workshop located in the centre of Gaza City. He waited for hours to get paid, but his employer, the workshop owner, did not return. Ahmed went home and started thinking how he would afford the fees needed to secure a place at his university.

Ahmed is part of an eight-member family, and his father has been unemployed for years. His younger brother left school at the age of 12, and started working at a car repair shop in order to help his family survive the deteriorating economic situation of the Gaza Strip. Ahmed did not go to his university for the first semester, fortunately finding a part time job where he was paid NIS100 ($30) per week. Due to the exhausted economy in Gaza that affected his employer’s work, he was not paid; thus, he could not afford the fees for the second semester of his second year.

Ahmed, who preferred not to have his picture taken or to be identified by his surname, said: “I was shocked! I worked to get money in order to pay for my study, but at the end I collected less than one third of the needed fees. This is not only my problem. It is the problem of all the youths in the besieged Gaza Strip. I have several friends who could not pay for the university and they are now sitting at home without study or work.”

The Gaza Strip has been under a strict Israeli and internationally-backed siege for 11 years. The siege started when the Islamic Palestinian Movement Hamas won free elections in 2006, which Fateh, along with Arab and Western countries, did not recognise. After one year of security chaos, Hamas swept Fateh out of Gaza and took up government responsibilities.

Since the start of the siege, Israel has launched three major offensives on Gaza, killing around 4,000 people and wounding more than 20,000 others. It also caused unprecedented damage to infrastructure, thousands of homes and public facilities, including schools and hospitals. During 2017, the Fateh-run PA imposed punitive measures on Gaza that worsened their life. UN officials have several times said that Gaza is becoming “uninhabitable”, with 97 per cent of its water unfit for drinking, thanks to contaminated seawater, a severe lack of electricity and grave shortage of medicines.

On 12 October, 2017, Hamas and Fateh agreed on a reconciliation deal brokered by Egypt and promised to end the siege, lifting the PA’s punitive measures on condition of Hamas handing over control of Gaza to the Fateh-run PA. The Gaza residents cheered and applauded the deal, hoping that they would return to normal life like other people. However, the situation deteriorated as the PA and Egypt did not fulfill their commitments. The PA even escalated its punitive measures imposed on Gaza.

With no solutions on the horizon, the besieged Gaza Strip is heading to a “dark future”, which might stir the social and political situation across the occupied Palestinian territories. “Gaza residents suffer unprecedented unemployment rates and you see parents unable to afford the basic needs for their children,” PR Manager of the Chamber of Commerce in Gaza Maher al-Tabbaa said, noting that the unemployment rate among Gazans is the highest in the world.

“The unemployment rate in Gaza is above 60 per cent, while the rate of Gazans living below poverty line is above 65 per cent, with 80 per cent of Gaza residents living on international aid,” Economic Expert in Gaza Mohamed Abu-Jayyab told MEMO. He stressed that the Gaza Strip “is not on the verge of economic collapse, but has already started to economically and socially collapse.”

Mahmoud al-Toum, 18, who finished his secondary school in 2017 but had no money to pay for university, borrowed some money and bought a small cart, preferring to sell lupine and beans in order to help his family. “Doing this, I may be able to collect enough money to buy some of the basic needs and necessary medicines for my disabled father and brothers” he said.

Al-Toum’s family consists of 18 members. His father and four of his brothers were injured in two separate Israeli bombings that left them disabled. He is now the only one in his family who is able to work.

Businessman Ashraf al-Qarra from Khan Younis, south of the Gaza Strip, describes the economic situation in Gaza as “going to hell”, identifying the reasons as the political disputes. He said that he sacked 45 workers from his construction business. “These workers became strays in the streets looking for pennies,” he said, “they are currently unable to feed their children.”

Al-Qarra said that the worsening economic situation in Gaza has led many of the traders to bankruptcy. “More than of 60 per cent of the traders bankrupted,” he said. “Those who survived in 2016, announced their bankruptcy in 2017,” he added. He said that he has been waiting for the crossings to open in order to migrate from Gaza, “which has no electricity or fuel while we pay three taxes –to Israel, the PA in Ramallah and the government in Gaza.

Businessman Fu’ad al-Samna said: “We are currently experiencing the last scene of the [worst] scenario prepared for the Gaza Strip and likely living the end of economic existence in Gaza.” Al-Samna did not sack any of his workers, but opted to give them chance to work with low capacity. “I am recruiting 170 workers. They are currently working only with 40 per cent of their capacity,” he said.

Al-Samna called for all the Palestinian officials and the Palestinian faction to work hard to rescue the Gaza economy “before it is too late,” stressing that Gaza’s economy, which was described by the economic expert Abu-Jayyab as “exhausted,” is heading to the worst end.

“In addition to the negative indicators of Gaza economy,” Abu-Jayyab noted, “the halt by the PA of transfers to Gaza ministries and full payments for Gaza employees is leading to a cash drain – and then Gaza’s economy will have collapsed.”

Al-Tabbaa blamed the exhausted economy on the “repeated” Israeli offensives on Gaza, the closure of the crossings, the delay of reconstruction and the strict Israeli measures taken against Gaza traders in 2017.

“Israeli authorities cancelled more than 3,000 travel permits for traders and businessmen from Gaza in 2017 and arrested tens of them at Erez Crossing,” he said. “Israel also added a lot of goods and commodities to the Gaza blacklist,” he added, noting “this is part of the Israeli policy to tighten the siege on Gaza.”

On Sunday, the Israeli President Reuven Rivlin toured the border area around the Gaza Strip and told journalists that “Gaza is on the verge of collapse”, warning that “the time is coming near when the infrastructure in Gaza will collapse, leaving many civilians in distress, with no sanitary conditions, exposed to pollution, impure water and epidemics.”

Rivlin ignored the 11-year-old strict Israeli siege imposed on Gaza, during which Israel launched three massive offensives against the coastal enclave and said: “The entire world must know and understand that the ones who are preventing rehabilitation are Hamas,” he claimed. “We will not tolerate accusations of blame.” This proves that Israel bears the full responsibility for the deterioration of the life in Gaza as its president is clearly blaming freely-elected rulers of Gaza, while at the same time preventing world delegations from visiting it.

Former UN Special Rapporteur on Palestine Professor Richard Falk has several times described the Israeli siege on the Gaza Strip as a “crime against humanity.”