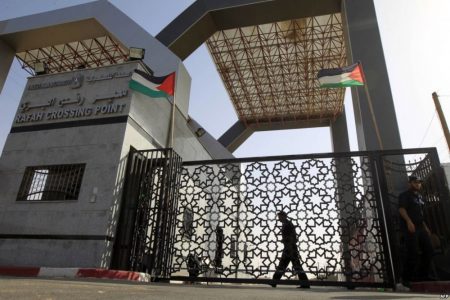 In Gaza, local authorities in the Israel-besieged territory announced that the Rafah Egyptian-Palestinian crossing terminal, sole outlet to the world for Gaza’s 2-million residents, will be closed for two weeks, for travelers on both sides of the crossing.

According to a statement, released Saturday night by the Hamas-led authorities in Gaza, the Rafah crossing would be closed as part of the authorities’ efforts to contain the Corona Virus, with dozens of cases discovered in nearby Egypt.

Only very critical humanitarian cases, like Gaza patients in need of urgent medical care, will be able to cross into Egypt.

Up to date, Gaza has been marked as a Corona virus-free region, unlike other Palestinian areas, such as the West Bank city of Bethlehem, where dozens of cases of Corona Virus have been so far discovered.

In the meantime, the Israeli occupation authorities have decided to indefinitely close the Erez border terminal, known in Gaza as the Beit Hanoun crossing,  starting Sunday.

Erez crossing will remain closed except for a few humanitarian cases, after receiving the proper coordination and approval.

All previously-announced arrangements for other joint crossings between Israel and Palestinians, will remain unchanged.

In Israel, more than 200 cases of Corona Virus, have been reportedly discovered.

Corona Virus has recently forced many world countries to take a number of precaution measures, such as the closure of schools and universities, as well as public places. Other countries, such as Italy, remained in either complete or partial lockdown.