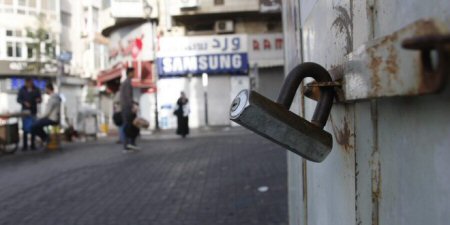 Palestinian factions, today, announced a general strike in the occupied West Bank and besieged Gaza Strip, in protest against Bahrain’s hosting of the “Peace to Prosperity” conference.

The conference kicked off today in Bahraini capital of Manama, to discuss the economic aspects of the long-awaited “Deal of the Century”.

Last weekend, US President Donald Trump’s son-in-law and advisor for the Middle East, Jared Kushner, revealed details of the plan, stating that $50 billion would be invested in the region. More than half of this $50 billion would be spent in the economically-troubled Palestinian territories over ten years, while the rest would be split between Egypt, Lebanon and Jordan.

The National Committee for the Great March of Return and Breaking the Siege announced a series of activities, this week, in rejection of the conference. It has called for widespread participation in the general strike, and said it will organize a National Conference in the Strip’s central Gaza City, Days of Palestine further reports.

Meanwhile, the Committee condemned Arab participation in the Bahrain summit, and called on them to respect the united Palestinian rejection of the conference, which, it argues, aims to undermine Palestinian rights and principles.

As part of the activities announced by the Committee and the Palestinian factions, the Palestinian protesters will gather near Israeli checkpoints in Gaza and the West Bank. Witnesses reported that tens of Palestinians are currently gathering in front of Erez (Beit Hanoun) crossing, in the north of the Gaza Strip.