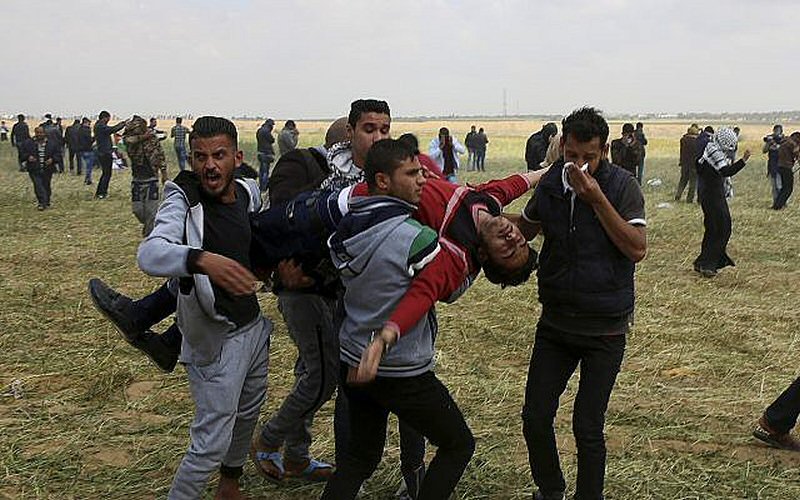 The death counter ticked away wildly. One death every 30 minutes. Again. Another one. One more. Israel was busy preparing for the seder night. TV stations continued broadcasting their nonsense.

It’s not hard to imagine what would have happened if a settler had been stabbed – on-site broadcasts, throw open the studios. But in Gaza the Israel Defense Forces continued to massacre mercilessly, with a horrific rhythm, as Israel celebrated Passover.

If there was any concern, it was because soldiers couldn’t celebrate the seder. By nightfall the body count had reached at least 15, all of them by live fire, with more than 750 wounded. Tanks and sharpshooters against unarmed civilians. That’s called a massacre. There’s no other word for it.

Comic relief was provided by the army spokesman, who announced in the evening: “A shooting attack was foiled. Two terrorists approached the fence and fired at our soldiers.” This came after the 12th Palestinian fatality and who knows how many wounded.

Sharpshooters fired at hundreds of civilians but two Palestinians who dared return fire at the soldiers who were massacring them are “terrorists,” their actions labeled “terror attacks” and their sentence – death. The lack of self-awareness has never sunk to such depths in the IDF.

As usual, the media lent its appalling support. After 15 deaths Or Heller on Channel 10 News declared that the most serious incident of the day had been the firing by the two Palestinians. Dan Margalit “saluted” the army.

Israel was brainwashed again and sat down to a festive meal in a spirit of self-satisfaction. And then people recited “Pour out Thy wrath upon the nations that know Thee not,” impressed by the spread of plagues and enthusing at the mass murder of babies (the killing of the first-born Egyptians, the 10th plague).

Christian Good Friday and the Jewish seder night became a day of blood for the Palestinians in Gaza. You can’t even call it a war crime because there was no war there.

The test by which the IDF and the pathological indifference of public opinion should be judged is the following: What would happen if Jewish Israeli demonstrators, ultra-Orthodox or others, threatened to invade the Knesset? Would such insane live fire by tanks or sharpshooters be understood by the public? Would the murder of 15 Jewish demonstrators pass with silence? And if several dozen Palestinians managed to enter Israel, would that justify a massacre?

The killing of Palestinians is accepted in Israel more lightly than the killing of mosquitoes. There’s nothing cheaper in Israel than Palestinian blood. If there were a hundred or even a thousand deaths Israel would still “salute” the IDF. This is the army whose commander, the good and moderate Gadi Eisenkot, is received with such pride by Israelis. Of course, in the holiday media interviews, no one asked him about the anticipated massacre and no one will ask him now either.

But an army that prides itself on shooting a farmer on his land, showing the video on its website in order to intimidate Gazans; an army that pits tanks against civilians and boasts of one hundred snipers waiting for the demonstrators is an army that has lost all restraint. As if there weren’t other measures. As if the IDF had the authority or right to prevent demonstrations in Gaza, threatening bus drivers not to transport protesters in territory where the occupation has long ended, as everyone knows.

Despairing young men sneak in from Gaza, armed with ridiculous weapons, marching dozens of kilometres without hurting anyone, only waiting to be caught so as to escape Gaza’s poverty in an Israeli jail. This doesn’t touch anyone’s conscience either. The main thing is that the IDF proudly presents its catch. Palestinian Authority President Mahmoud Abbas is responsible for the situation in Gaza. And Hamas, of course. And Egypt. And the Arab world and the whole world. Just not Israel. It left Gaza and Israeli soldiers never commit massacres.

The names were published in the evening. One man was rising from his prayers, another was shot while fleeing. The names won’t move anyone. Mohammed al-Najar, Omar Abu Samur, Ahmed Odeh, Sari Odeh, Bader al-Sabag. This space is too small, to our horror, to list all their names. [See them here.]