GMO Declares Day of Solidarity with the Palestinian Journalist 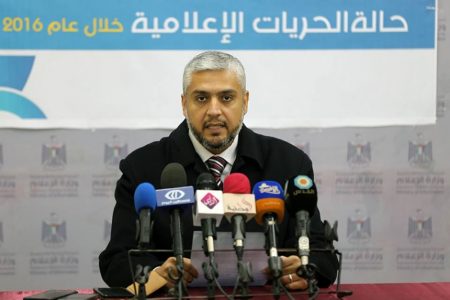 Head of the Palestinian government media office in Gaza, Salama Ma’rouf, has announced a day of solidarity with Palestinian journalists, coinciding on December 31st, and to include various activities in support.

Ma’rouf said, during a press conference on Sunday, that the activities would continue for ten days, with cooperation from several institutions.

He added that the activities will began with the football league and with the cooperation of several institutions, including the Ministry of Sports and Amwaj Media. The football league deisgnated a Palestinian journalist day championship for December 21st and 22nd.

According to Al Ray Palestinian Media Agency, a seminar about social responsibility towards Palestinian journalists is to be held on 26 December.

Ma’rouf explained that the activities will conclude on 31 December, with the honoring of disabled journalists, during which a display regarding journalists’ sacrifices will featured.

He praised the role of Palestinian journalists and their acts of heroism which help in resisting the Israeli military occupation, and called for serious support, from all interested international media organizations, in stopping Israeli violations against journalists.

The Palestinian government in Gaza has adopted the date of December 31st, each year, for this purpose, in gratitude of their sacrifices.