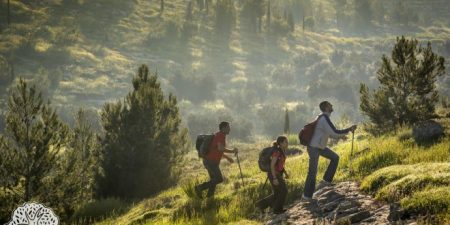 Masar Ibrahim Al-Khalil (MIAK), has recently published a documentary which introduces the touristic environmental paths in Palestine, allowing locals and internationals to explore Palestine and its nature through hiking a trail which runs through the West Bank, from the Mediterranean olive groves of the highlands of the north to the silence of the deserts in the south, from the area west of Jenin to the area south of the Sanctuary of Abraham (known in Arabic as Al-Haram Al-Ibrahimi), in the city of Al-Khalil (Hebron).

MIAK is a non-profit community-based tourism initiative that delineates, and develops Masar Ibrahim in and around different Palestinian localities.

The organization endorses cultural diversity and exchange, safeguards tradition and heritage, inspires storytelling and encourages friendships based on the advancement of human values and the preservation of the surrounding environment and the people’s needs for further growth and education.

Head of MIAK, George Rishmawi, told the PNN that the newly released documentary focuses on the great experiences anyone can live through walking such paths, whether for locals or internationals. In addition, this helps people to understands all features of life in Palestine, whether political, touristic or economic, and it also shows the beauty of Palestine all year around.

Rishmawi stressed that the MIAK slogan, “Walk a Path of History, Experience Nature and Hospitality ” was inspired by the generosity of the Palestinian people and the beauty of nature in Palestine, adding that this is one way to strengthen the social tourism and let the tourists explore new sites.

The video also displays the experience of international tourists who have expressed how happy they were to get to know Palestine and its people, and get to know a new place they have never been before.

This project, which also counts as a financial source to homestay hosts, allows Palestinians to get to meet and host new people and new cultures non-stop, share their culture and learn about others’.

According to Palestinian tour guide John Teeq, who specializes in Palestinian trail studies, says that the idea of Masar Ibrahim is a leader in environmental tourism, which is a growing new attraction, and has been showing a lot of improvement, during the recent years.