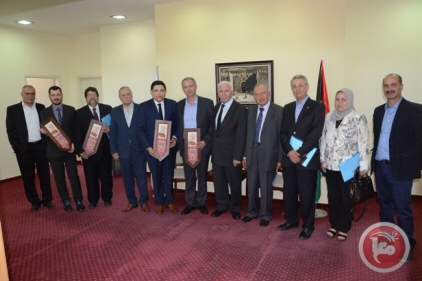 Syriza, the ruling party in the Greek parliament, told Palestinian lawmakers, Saturday, that the government was set to officially recognize the state of Palestine, according to a statement by the Palestinian Legislative Council (PLC).

A Greek delegation from the Syriza party reportedly met with political parties of the PLC and confirmed that the government would recognize the state of Palestine “soon,” according to the statement.

However, Ma’an News Agency reports that an exact timetable for the future recognition was not provided by the Greek delegates.

The Syriza delegates met with Azzam al-Ahmad of the Fateh movement, Qays Abdul Karim of the Democratic Front for the Liberation of Palestine, Mustafa Barghouti of the Palestinian National Initiative, Bassam al-Salihi of the Palestinian People’s Party, and the Fateh-affiliated lawmakers Najat al-Astal, Muhib Awwad, and Abdullah Abdullah.

The Greek parliament voted in favor of a decision to recommend the government recognize the state of Palestine in December. However, the decision has not yet come to fruition.