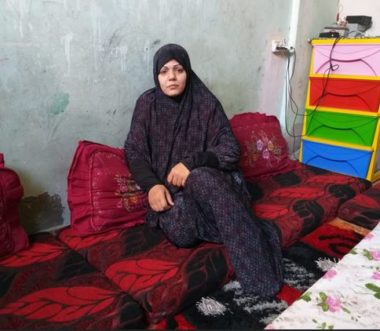 The Palestinian Center for Human Rights: Around month and a half after being injured by the Israeli forces, pain so far dwells the body of Palestinian woman Malinah al-Hendi (34) and hinders her responsibility of taking care of her family.

Malinah, mother of six children, was shot by an Israeli sniper with a bullet that penetrated the right side of her abdomen while its shrapnel settled in her back to remain a source of suffering and concern, a reminder of difficult moments when she almost lost her life; and a witness to the most prominent form of violence the Palestinian women suffer from on the World Day To End Violence against Women.

The details of the incident seem to be present in the memory of the wounded woman as if it was today, and how not to be when her body pulses with pain every moment.

Malinah said to PCHR‚Äôs fieldworker that: ‚ÄúOn Friday, 26 October 2018, as every Friday, I was participating in the Return demonstration, east of Khuza‚Äôah village, but this time, the demonstration moved from its ususal location in the northern side of the Return encampment to its southeastern side, precisely in front of the Israeli diggers.‚Äù

Demonstrators started falling one by one, and there were news about civilians killed. Ambulances‚Äô sirens did not stop as they were constantly moving between the demonstration location and the field hospital. Malina was stepping to the eastern side raising the Palestinian flag and approaching the border fence with Israel.

Malinah was silent for a while as she seemed to be affected and then said: ‚ÄúI was raising the Palestinian flag and approaching the border fence with a number of protestors. The Israeli snipers stationed on sand berms along the border fence were clearly seeing me as neither the other protestors nor I were posing any threat to their lives.‚Äù

Malinah saw the Israeli forces firing a barrage of teargas canisters at the area, so she turned to warn a group of protestors, who were around her. Suddenly, she felt a strong hit to the right side of her abdomen. Malinah said: ‚ÄúI did not know what happened, but the pain was very severe.¬Ý I then started running to move away from the area and with each move, the pain got worse.‚Äù

Malinah was touching the right side of her body as she felt pain. She added: ‚ÄúI was able to reach a sand berm behind which a group of protestors were. I noticed a swelling and blood in the right side of my body and felt so much pain.¬Ý Immediately, a group of paramedics approached and carried me on a litter to an ambulance.‚Äù

In that moment, the pictures of Malinah‚Äôs children were flashing one by one. While she was mid-conscious, she said to her friend who got with her into the ambulance: ‚Äútake care of my children please.‚Äù

She turned her face in an attempt not to hear the news about her death. She added: ‚Äúmy eldest son is in the 10th grade and the youngest is in the 5th grade.‚Äù I felt that my end is near, so I feared for my children and who would take care of them if anything happened to me, so my will for my friend was to take care of them.‚Äù¬Ý

In the medical point, which was stuffed full with injuries (the toll of victims on that day was 3 persons killed and 52 others wounded, according to PCHR‚Äôs documentation), it was found out that Malinah was hit with a live bullet that settled in her abdomen. Malinah‚Äôs condition was serious, so she was immediately taken to the Gaza European Hospital in Khan Yunis.

It turned out that the live bullet settled in her back and one of its shrapnel settled near her kidney.¬Ý Her health condition was classified serious, but Allah‚Äôs will was merciful.

She stayed in the Intensive Care Unit (ICU) for two days and her family was waiting for assurances until her health condition began to plateau.

Doctors told her that there was a risk of removing the bullet and shrapnel for fear of occurrence of bleeding in this stage. After that, she was transferred to Nasser Hospital for few days to be closer to her house, which is in the buildings adjacent to the Austrian neighborhood behind the hospital.

Few days after receiving treatment, she returned home carrying pain, a bullet, and shrapnel with her.¬Ý The house‚Äôs outer walls are full of holes due to being constantly subject to the Israeli fire 13 years ago from their sites in the so-known ‚ÄúNeve Dekalim‚Äù settlement, which was evacuated in 2005.

Um Hitham ‚ÄúMalina‚Äù was trying to endure her pain when she was talking about her 3rd injury during the Return March. She continued, ‚ÄúPain gets worse, I feel a strange object in my body, I barely hold my own to do the household chores and have to rest from time to time.‚Äù

At night and in the cold weather, the pain increases and Malina feels that her wound is open. She looks at her children and husband and say: ‚ÄúDoctors told me that I need a surgery but has not scheduled it yet. I cannot stop worrying about them as they completely depend on me.‚Äù

Malina‚Äôs husband, Hamdi al-Hendi (38), a retired PA employee, who also was wounded by the Israeli forces, agreed with his wife and said: ‚Äúon 10 August, while participating in the Return March, I was hit with a live bullet to the abdomen and leg and now my heath condition is better than before. Moreover, our son Moayad (13) was wounded and his health condition was classified as minor. He added: ‚ÄúMalinah‚Äôs injury was very difficult for us, because she is the backbone of the house.‚Äù

Malinah and Hani were familiar faces among the demonstrators in the Return March in eastern Khuza‚Äôah, east of Khan Younis. PCHR‚Äôs fieldworker previously took many photos of them while participating in the demonstrations for their impressive presence.

Malinah, the Palestinian refugee who is originally from al-Majdal village, said: ‚ÄúI always participate as for me this is a national action. I dream of returning home and breaking the siege, so I participate every Friday with all my family members even after I got wounded my injury‚Äù.

She smiles as she talks about her feeling when she approaches the border fence: ‚ÄúI raise the flag and pose no danger to them (the Israeli soldiers). They know that and can clearly see me because I am in an open area.‚Äù

She added, ‚ÄúHowever, they fooled me and previously fired twice tear gas canisters at me to the right hand, which still has burn marks. That was on 04 May and 08 June, but the most serious injury was the third one. I always wonder why the wounded me while I do not pose threat to them‚Äù.

Our visit to al-Hendi house coincided with the International Day for the Elimination of Violence against Women on 25 November, the day proclaimed by the United Nations in December 1999 to end violence against women and girls in the whole world.

‚ÄúThere is no more violence than that practiced by the Israeli forces against us‚Äù says Malinah, referring to her condition and other women who are victims of the Israeli snipers in the Return March.

According to PCHR‚Äôs documentation, the Israeli forces used excessive force in the Return March, including firing live bullets and tear gas canisters.

As a result, 175 civilians were killed. Among those persons killed was the volunteer paramedic Rozan al-Najjar (21), who was killed while rescuing those persons wounded; and Wesal al-Sheikh (15). Moreover, 9621 civilians, including 256 women, have been so far wounded.

Nevertheless, Malinah and her husband shows strong determination to continue participating in the demonstrations adhering to the dream of return and breaking the siege, holding the Israeli forces accountable and achieving justice.