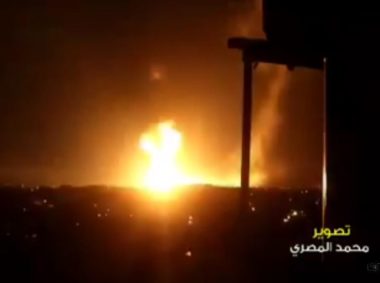 The al-Hayat daily has reported Friday that Egypt has brokered a possible “understanding” between Israel and Hamas, the ruling party in Gaza.

The Israeli government has also reportedly agreed to increase fuel and electricity supplies in Gaza, in addition to allowing the United Nations to continue their humanitarian efforts.

The agreement, according to al-Hayat,  will not only end the Great Return March weekly protests at the eastern borders of the Gaza Strip, but will also end the launch of flammable balloons and kites continuously launched from Gaza as a means of protest.

Maan stated that Hamas and Israel, through Egyptian mediation,  also reached understandings regarding a long-term ceasefire arrangement, sponsored by Egypt, which would see the lifting of the Gaza blockade in exchange for complete cessation of border protest.

The Palestinian Authority in the West Bank was quoted as saying, “any agreement with Israel, must include the Palestine Liberation Organization (PLO), and all factions, and not between Tel Aviv and individual factions.

The Egyptian mediators assured the PA that this was not a truce agreement, but an effort to stop the border violence, and to alleviate some of Israel’s suffocating blockade of the Gaza Strip.

In addition, the Egyptian Public Intelligence head, is said to be expected to announce this deal officially.

Israeli missiles also caused damage to homes, and the Indonesia Hospital, after the army fired five missiles at a site near Sheikh Zayed area, north of Gaza.