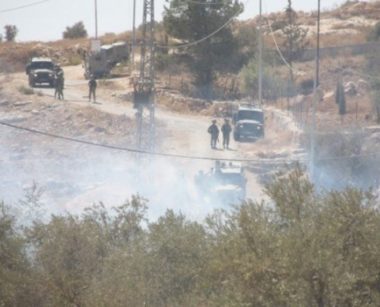 Israeli soldiers resorted, Friday, to the excessive use of force against Palestinian and international peace activists, marching against the illegal occupation, the Annexation Wall and Colonies, in Bil’in and Ni’lin villages, west of the central West Bank city of Ramallah.

Medical sources said the soldiers caused many locals and international peace activists to suffer the effects of teargas inhalation, in Bil’in.

The procession in the village started in the afternoon from the center of the village towards the illegally Annexation Wall, isolating the villagers from their lands, before the soldiers started firing a barrage of gas bombs at them.

The procession was attended by many Israeli peace activists, and internationals solidarity activists, including a delegation from France, who marched against the occupation, Israel’s decision to demolish the al-Khan al-Ahmar Palestinian Bedouin village, in east Jerusalem.

The nonviolent protesters chanted for national unity, the release of all detainees, the return of all refugees, and for ending the illegal apartheid Israeli occupation of Palestine.

In nearby Ni’lin, the protesters also marched chanting against the colonies, the wall and the occupation, while the soldiers fired many concussion grenades and gas bombs at them, causing many to suffer the effects of teargas inhalation.

They carried Palestinian flags and chanted for ongoing popular resistance against the Israeli occupation and its illegal colonization and apartheid policies.

In Kufur Qaddoum town east of the northern West Bank city of Qalqilia, the soldiers attacked the weekly procession and fired many rubber-coated steel bullets, gas bombs and concussion grenades, causing many to suffer the effects of teargas inhalation.

Also on Friday, the soldiers Killed one Palestinian near Ramallah, in addition to killing four others, and wounding 323, in Gaza.