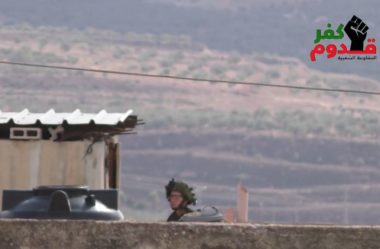 Israeli soldiers attacked, Friday, the weekly procession in Kufur Qaddoum town east of the northern West Bank city of Qalqilia, and fired many rubber-coated steel bullets, gas bombs and concussion grenades, causing many to suffer the effects of teargas inhalation.

Morad Eshteiwi, the media coordinator of the Popular Committee against the Wall and Colonies in Kufur Qaddoum, said the soldiers resorted to the excessive use of force against the Palestinians, and international peace activists, who marched from the center of the village.

He added that the soldiers injured eight Palestinians, who received the required treatment for the effects of teargas inhalation, without the need for hospitalization.

Eshteiwi stated that the soldiers invaded the home of Zahi Ali, detained the family in one room, before violently searching the property and smashing windows, and occupied the rooftop to use it as a firing post.

Furthermore, dozens of illegal colonialist settlers gathered near the iron gate which was installed by the army fifteen years ago at the main entrance of the town, and started chanting against the Palestinians.

Kufur Qaddoum witnesses frequent Israeli invasions, assaults and abductions as it continues to hold is weekly nonviolent processions against the illegal Annexation Wall and colonies, and against the closure of the main road, which was blockaded by the military fifteen years ago to enable easy access for colonialist settlers driving to and from the Kedumim colony, built on private Palestinian lands.

Also on Friday, the soldiers Killed one Palestinian near Ramallah, in addition to killing four others, and wounding 323, in Gaza.