Hamas: Gazans Will Continue to Protest on the Border, Will Not Give Up Right of Return 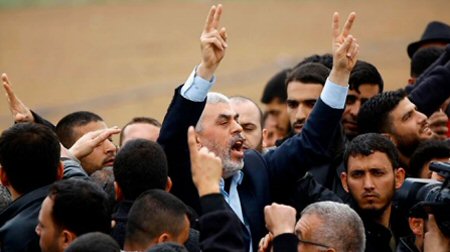 Hamas resistance leadership has announced that the protests on the border between the Gaza Strip and Israel will continue, after visiting the various protest locations.

Head of the Hamas political bureau, Ismail Haniyeh, was east of Gaza City. Hamas leader in Gaza, Yahya Sinwar, was in the southern Gaza Strip and Gaza Interior Minister Fathi Hamad was in the north of the region. They were seen among the crowd, encouraging the people and showing their support.

“This march demonstrates that there are no alternatives to Palestine and the right of return (for the Palestinian people),” Haniyeh told exuberant gatherers, praising their decision to leave their home and attend the protest to “write the future.”

Haniyeh then brought to attention the goal of the march, telling attendees it constitutes “the beginning of a return (of the Palestinian people) to the entirety of the land of Palestine.”

“We will not give up and we will not bargain with the Zionist entity over even a small piece of the land of Palestine,” Haniyeh continued, according to the PNN, stressing they will reject any deal proposed by the Donald Trump administration, who he blamed for trampling Palestinian right by “Trump’s decision to grant Jerusalem to Israel.”

“Israel’s threats do not scare us. Our people went out today to make it clear that we will not give up Jerusalem and that there is no alternative to Palestine and the right of return.

“We will not accept the right of return staying only a slogan,” he concluded, telling the crowd, “walk in the path of God—you are the victors.”

Sinwar, meanwhile, said the protests are a signal to Israel and the world that “our people will not accept the continuation of the siege.”

Hamas spokesman Fawzi Barhoum praised the turnout. “The large crowds … reflect the Palestinian people’s determination to achieve the right of return and break the siege and no force can stop this right,” he said.