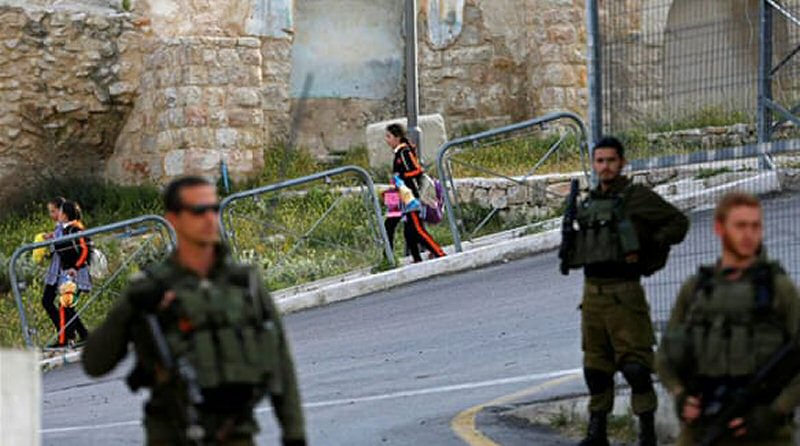 While the international community and media created an uproar when Israeli Prime Minister¬†Benjamin Netanyahu¬†announced his intent to annex the¬†West Bank¬†in a bid to garner votes during last month’s elections, many Palestinians living in the occupied territory were not fazed by the right-wing leader’s words.

He recounted a recent incident when he was handed a traffic fine by an Israeli police officer on Road 60 – an Israeli road that cuts through the occupied territory used by both Israelis and Palestinians – near his village of Madama in the northern West Bank.

“I had to go to Beit El (an illegal Israeli settlement in the West Bank) in order to pay the fine. Israel already treats this area as its own. So, no, I definitely was not shocked by Netanyahu’s statement,” he said.

An official annexation of parts or the whole of the West Bank would likely result in a dramatic escalation of policies, which Palestinians say are aimed at eroding basic rights and self-determination.

However, Israeli and Palestinian analysts have told Al Jazeera that international concerns over Netanyahu’s comments were not reflective of reality, which has seen an incremental process of annexation in the occupied territory for decades.

Since Israel occupied the West Bank and Gaza Strip in 1967, and particularly following the Oslo Accords in the 1990s that broke up the West Bank into Areas A, B, and C – leaving about 60 percent of the land under full Israeli military control – “Israel has used and treated the entire area as if it was a part of sovereign Israel,” Amit Gilutz, spokesperson of Israeli rights group B’Tselem, said.

Unlike the rest of the West Bank, however, East Jerusalem was officially annexed into Israeli territory after Israel’s military conquest of the area more than a half-century ago.

According to Yara Hawari, a fellow at the independent Palestinian policy network al-Shabaka, there was a juncture between the international uproar following Netanyahu’s statements and the realities on the ground.

“In reality, there is one regime which controls everything from the river to the sea, and that’s the Israeli regime,” she said.

In Area C, home to about 300,000 Palestinians, the Israeli army has full control over the management of resources, planning and construction, and strictly limits Palestinian construction or development to less than one percent of the area, most of which is already built up, according to the UN.

“They [Palestinians] are denied any legal avenue to build homes or develop their communities, so they face the constant fear that their homes might be demolished, and that they [may] be expelled and lose their livelihood,” B’Tselem¬†has noted.

At the same time, the Israeli government has continued to expand illegal settlements throughout Area C, with up to 600,000 Israelis living in the occupied territory in violation of international law, while creating an extensive network of roads connecting settlements to each other and to towns and cities across the Green Line – which divides the occupied territory from Israel.

“For Israelis travelling in the West Bank, you might not even feel like it is under occupation because the Green Line has been essentially erased,” Gilutz explained. “It doesn’t exist for settlers, whereas it’s a very real border for Palestinians.”

Meanwhile, there are¬†dozens¬†of Israeli police stations established in Area C, which patrol the area and issue Israeli fines to Palestinians who are caught speeding, not wearing their seat belts or committing other violations – despite Israeli police not being authorised to operate in the West Bank because it is not part of Israel’s sovereign territory.

In addition, there are 165 enclaves of Area A – where the Palestinian Authority (PA) has authority – and B – where there is joint Israeli-PA control, scattered like islands throughout Area C, and home to the majority of Palestinians in the West Bank.

These enclaves are “disconnected from one another and the resources they need to develop in any kind of sustainable way, because Area C contains everything that is needed for there to be a viable existence in this region,” Gilutz said, adding that Israel utilises the resources in Area C for the benefit of its own citizens, at the expense of Palestinian development.

Israel has long focused on creating facts on the ground that would control as much land and resources as possible, with as few Palestinians on that land as possible, Hawari said.

“All of this is very predictable,” Gilutz added. “The situation has been moving in this one direction for many decades.”

Despite these Oslo-era land designations, Hawari says Israel continues to control the entire territory, and even in Area A the PA only “maintains the population” as a policing force, while Israel retains de facto control over the area.

While Israel already controls the whole of the West Bank, Hawari says, a legal annexation of the territory would see an increase in Israeli settlement building, while the language of annexation has fuelled the Israeli right-wing, particularly “violent settlers”.

These repressive measures against Palestinians would accelerate if the territory were officially annexed, she explains, but “it will still be a slow process of passing various forms of legislation”.

Israeli rights group Yesh Din has¬†documented¬†60 bills proposed during the 20th Knesset (2015-2019) that pertained to the annexation of the West Bank, eight of which were approved and became law.

According to the group, this reflects the “transition from de facto annexation to de jure annexation” of the West Bank, noting that the Israeli parliament “regards itself as the legislative authority in the West Bank and the sovereign there”, as opposed to the military commander, who is expected to be the acting sovereign in the occupied territory as outlined in international humanitarian law.

Gilutz says Israel uses the pretext of security and the “temporariness of occupation” as a sophisticated strategy to “exploit the area for its own needs, use the resources, and engineer the space demographically so that Palestinians are concentrated in enclaves disconnected from one another and from the resources they need to thrive – and which Israel wants for itself”.

However, Israel’s occupation of the West Bank is “clearly not designed to be temporary, but rather to last”, he added.

In this sense, the situation as it is today could be more beneficial to Israel than a formal annexation of the West Bank, Gilutz noted. “The facade of legality of this whole system of control is quite effective in how it allows Israel to portray itself as a democracy, and enjoy all the perks of being a member state in that club.”

Yesh Din has noted that the intensification of annexation signals that Israel is “transforming itself into an apartheid state”.

Despite Israel’s parliament creating legislation that directly affects millions of Palestinians in the occupied territory, they have no right to vote and lack any ability to influence Israeli policy.

“Two types of people live under Israel’s regime and are subject to its control and sovereignty: Israeli citizens who have full rights, and Palestinian residents who lack political rights, as well as other rights,” the group has noted.

Hawari points out that Palestinians in occupied East Jerusalem are an accurate case study for the potential annexation of the rest of the West Bank. Although Israel formally annexed the territory, Palestinians were not granted citizenship, but instead were issued Jerusalem IDs, which can be¬†revoked¬†for a variety of reasons.

Almost 15,000 Palestinians have had their Jerusalem IDs revoked by the Israeli state since 1967, according to Human Rights Watch. Meanwhile, although Palestinians in East Jerusalem are permitted to vote in Jerusalem’s municipal elections, they are barred from voting in national elections.

However, Gilutz says the question of political rights is “just as relevant today as it will be if Israel formally annexes the West Bank, because Palestinians have already been living under Israel’s control for generations without political rights”.

He added that perhaps a formal annexation will increase international pressure on Israel to grant Palestinians political rights, but “from our perspective, it doesn’t actually matter”.

“What matters are the rights and freedoms of people who are already living under direct Israeli rule.”

In Gilutz’s perspective, the main issue is not whether the West Bank is annexed or not.

“The better question is why the annexation that has already existed has been allowed to develop, deepen and continue in broad daylight without the international community taking more decisive action in order to stop it,” he said.