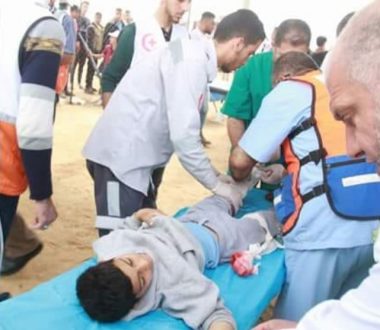 The Palestinian Health Ministry in the Gaza Strip has reported that Israeli soldiers shot and killed, 30 Palestinians, and injured 5511 others, including 143 who suffered serious wounds, and 21 who suffered amputations.

The Health Ministry said the soldiers killed 40 Palestinians, including children, and two journalists since the nonviolent protesters started on Land Day, on March 30th, 2018.

It added that the soldiers shot and injured 5111 Palestinians, including 3368 who were rushed to local hospitals in the Gaza Strip, and 2143 who received treatment in field clinics near border fence area.

The Ministry said that among the injured Palestinians are 592 children, and 192 women.

As for the extent of injuries, 143 suffered serious wounds, 1710 suffered moderate injuries, and 1515 were mildly wounded.

The injuries are classified as: