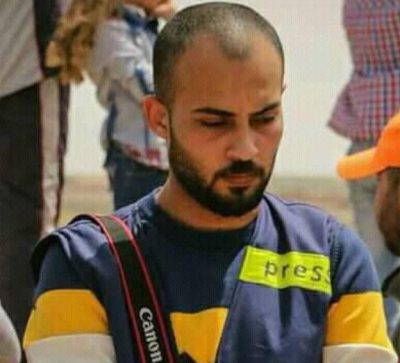 The Palestinian Health Ministry has reported that a journalist, who was shot and seriously injured by Israeli army fire near the eastern border of the Gaza Strip two weeks ago, has died from his wounds.

The Ministry stated that the Journalist, Ahmad Mohammad Abu Hussein, 25, from Jabalia refugee camp in northern Gaza, was shot on April 13, with an expanding bullet in the abdomen before he was rushed to the Indonesian Hospital, in Beit Lahia, also in northern Gaza.

On the same day, the soldiers also shot another journalist, identified as Mohammad al-Hajjar, with a live round in the soldiers.

Abu Hussein was transferred to Palestine Medical Complex in Ramallah, in central West Bank, on April 16, before he was moved to Tel HaShomer Israeli Hospital, on April 19, where he succumbed to his serious wounds.

He arrived in a coma to the hospital in Ramallah after repeated delays of his transfer by Israeli authorities and the denial of treatment by Israeli hospitals.

The head of the Palestinian Journalists’ Syndicate, Nassar Abu Bakr, criticized the delay in the transfer of the patient, telling reporters from the Ma’an News Agency, “The Israeli authorities committed two crimes against Abu Hussein, one when injuring him with an explosive bullet in the head and another when delaying his transfer from Gaza hospitals to Ramallah, as if the occupation insists on killing him.”

Abu Bakr said that specialized Israeli hospitals were better equipped to treat the severely wounded journalist, but none would accept to have him transferred. So he was sent to Ramallah General Hospital in the West Bank. He added that only through ‘strenuous efforts’ by a number of Palestinian officials was this transfer made possible.

It is worth mentioning that the slain journalist worked for the People’s Voice Radio (Sha’ab Radio), in Gaza. The Palestinian Journalists’ Syndicate issued a statement strongly condemning the ongoing Israeli violations against the journalists in Palestine, and urging all international, legal and human rights organizations to perform their duties and provide the needed protection to the Palestinian people.

It is also worth mentioning that Ahmad is the second journalist to be killed since the beginning of the Great March of Return nonviolent protests on March 30, which also masks the Palestinian Land Day.

On April 6th, the soldiers killed a Journalist, identified as Yasser Mortaja, 31, with a live round in the abdomen, below his ‘PRESS’ jacket, in the same area where Ahmad was shot.