Health Ministry: “56 Palestinians, Including 14 Children, And 5 Women, Killed By Israeli Missiles In Gaza” 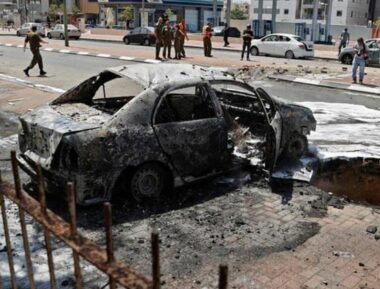 The Health Ministry in Gaza said the Israeli bombardment of the coastal region has led to the destruction of homes, residential towers, medical facilities, and other infrastructure, leading to the death of 56 Palestinians, including 14 children and five women, in addition to the injury of at least 335 Palestinians, some in a critical condition.

The army fired missiles into a home in the Sabra neighborhood, in the center of Gaza city, killing five Palestinians, including one woman, and injuring six others who were rushed to the Shifa Medical center, in the western part of the city.

The army also fires missiles into a home in the Sheikh Radwan neighborhood, north of Gaza city, causing several casualties.

In addition, the army fired a missile at a motorcycle, east of Khan Younis, in the southern part of the Gaza Strip, killing two Palestinians and injuring three, including one who is in a critical condition. Another Palestinian was also killed in an Israeli strike in the Sheja’eyya neighborhood, east of Gaza city.

The army also fired one missile at a civilian car in the Bani Sohelia neighborhood, in Khan Younis, killing two Palestinians and wounding one, while an Israeli drone fired a missile at a motorcycle, east of Khan Younis, causing one injury.

An elderly man and a child were also killed by Israeli missiles targeting their farmland in Rafah, in southern Gaza.

Two Palestinians were killed, and several others were injured, some seriously, when the army fired a missile at a car in Beit Lahia, in northern Gaza.

Israeli navy ships fired missiles towards the Gaza beach, south of Gaza city, while the army also fired missiles into a building east of Deir al-Balah, in central Gaza.