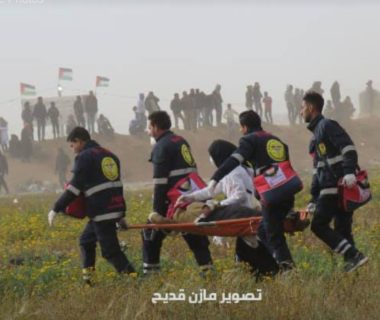 The Palestinian Health Ministry in the Gaza Strip has reported, Saturday, that Israeli soldiers killed 266 Palestinians, and injured 30398 others, since the Great Return March processions started on March 30, 2018, which also marks Palestinian Land Day. Four Palestinians were killed, Saturday, and 316, including 86 children and 29 women, were injured.

The Health Ministry stated that the soldiers killed 266 Palestinians, including 50 children, six women and one elderly man, and injured 30398 others, including 16027 who were moved to various hospitals and medical centers.

It said that among the wounded are 3175 children and 1008 women, and added that 136 Palestinians suffered amputations; 122 in the lower limbs, and 14 in the upper limbs.

The Ministry also stated that the soldiers killed three medics, identified as Razan Najjar, 22, Mousa Jaber Abu Hassanein, 36, and Abdullah al-Qutati, 20, and injured 665 others, in addition to causing damage to 112 ambulances.

Among the slain Palestinians are two journalists, identified as Yasser Mortaja, and journalist Ahmad Abu Hussein, in the Gaza Strip, while the soldiers injured dozens of journalists.

The latest information does not include dozens of Palestinians who were killed and injured by the Israeli army after crossing the perimeter fence and were never returned to the Gaza Strip.

On Saturday, March 30, 2019, which marks Palestinian Land Day, and the first anniversary of the Great Return March in the Gaza Strip, the soldiers killed four Palestinians, identified as Mohammad Jihad Sa’ad, 20, and Adham Nidal ‘Amara, 17, east of Gaza city, in addition to Tamer Hashem Abu al-Kheir, 17, and Bilal Mahmoud Najjar, 17, east of Khan Younis, in the southern part of the Gaza Strip.

It is worth mentioning that Mohammad Jihad Sa’ad was killed, east of Gaza city, on Friday morning, before the processions started.

316 Palestinians were injured by Israeli army fire, on the same day, and were rushed to several hospitals in the Gaza Strip; among them are 86 children and 29 women.