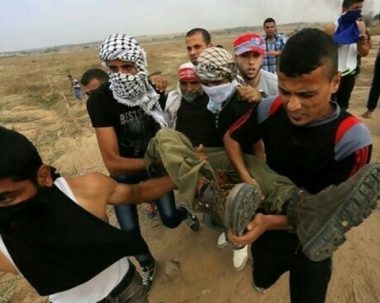 Dr. Ashraf al-Qedra, the spokesperson of the Palestinian Health Ministry in the Gaza Strip, has reported Sunday that Israeli soldiers have killed 112 Palestinians, and injured 13190 since the Great Return March protests started on the Palestinian Land Day, March 30th, 2018.

Dr. al-Qedra said that the soldiers killed 13 Palestinian children, and injured 2096 others, in addition to wounding 1029 women.

He added that 332 of the wounded Palestinians suffered life-threatening injuries, 3422 suffered moderate wounds, 9436 suffered mild injuries, and 5572 suffered the effects of teargas inhalation.

⇒ 502 Palestinians were shot in the head and neck.

⇒ 225 were shot in the abdomen and pelvis.

⇒ 1117 suffered various cuts and bruises to several parts of their bodies.

He also said that 27 of the wounded Palestinians suffered amputations in their legs, one in his arm, and four others had some fingers severed by Israeli fire.

Dr. al-Qedra added that the soldiers also shot and killed one medic, and injured 323 others with live fire and gas bombs, in addition to causing damage to 37 ambulances.