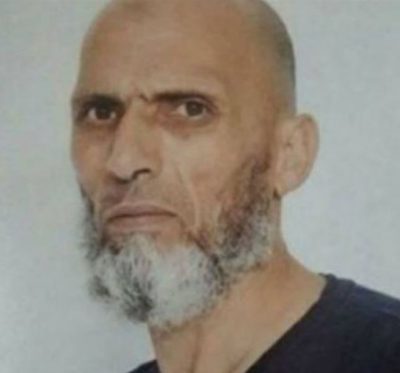 The Palestinian Detainees’ Committee has reported that detainee Aziz ‘Oweisat, 53, died at an Israeli hospital from serious complications after he was assaulted by several Israeli soldiers in the prison, who claimed he attacked an officer with a sharp object.

The Committee said ‘Oweisat, from Jabal al-Mokabber in occupied Jerusalem, was taken prisoner on March 24, 2014, and was sentenced to a life term.

The Committee added that he suffered brain hemorrhage and a heart attack after the soldiers continuously assaulting him in Eshil Israeli prison, on May 2, 2018, and went into a coma before he was moved to Ramla Israeli Medical Center.

Later, the detainee was moved to Assaf Harofeh Medical Center due to the seriousness of his condition, but he suffered further deterioration, and was transferred to Tal HaShomer Medical Center.

On May 10th, 2018, he underwent heart surgery at Tal HaShomer Israeli Medical Center, and lasted for nearly three hours. He remained in a critical condition.

Despite his serious condition, he was returned a few days ago to Assaf Harofeh Medical Center, after the Administration of Tal HaShomer refused to keep him hospitalized at their facility.

The Detainees’ Committee said he died at Assaf Harofeh Medical Center, due to the seriousness of his condition.

It is worth mentioning that the Detainees’ Committee filed an urgent appeal with an Israeli court asking for his release so that he could receive steady medical attention, and the court scheduled the hearing for May 25th. He did not make it to the hearing, however, since he died on May 20th.

The detainees in Israeli prisons and detention camps declared a three-day mourning period, and demanded that Israel be held accountable for its violations and crimes.

For its part, the Palestinian Prisoners’ Society (PPS) held Israel fully responsible for his death, especially since the Israeli Prison Authority refused to release him despite its knowledge of his serious condition.

It added that seven Palestinian detainees have died in the last five years after being denied medical attention, in addition to ‘Oweisat.

The PPS also said that 216 Palestinians have died in Israeli prisons and interrogation centers since Israel occupied the West Bank, the Gaza Strip, Golan and East Jerusalem, in 1967.

It added that 75 detainees were executed after the soldiers arrested them, 72 died while being tortured during interrogation, 7 were killed by the soldiers in prisons, and 62 died after being denied medical treatment.

The head of the Palestinian Detainees’ Committee, Issa Qaraqe, accused Israel of deliberately killing the detainee, and called for establishing an international committee to investigate Israeli crimes and violations against the detainees.

On Sunday night, dozens of Palestinians held a procession in Jabal al-Mokabber neighborhood, before the soldiers invaded the area and engaged in an excessive use of force against them.

The soldiers fired several live rounds, rubber-coated steel bullets and gas bombs, while many youngsters hurled stones at them.