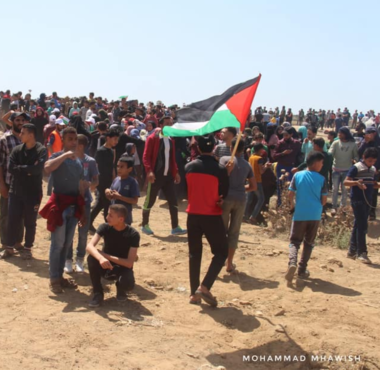 The Palestinian Health Ministry in the Gaza Strip has reported that Israeli soldiers injured 65 Palestinians, including 22 children and five women, and added that one of the injured Palestinians suffered serious wounds during the protests marking the Palestinian Nakba, in several parts of the coastal region.

Dr. Ashraf al-Qedra, the spokesperson of the Health Ministry in Gaza, said one of the injured Palestinians is in a serious condition, in addition to 15 who suffered moderate wounds and 49 who were mildly injured.

He added that 22 of the wounded Palestinians are children, and five are women, and said that the soldiers also targeted medics, wounding three with rubber-coated steel bullets.

Medical sources said the fisherman was shot with a rubber-coated steel bullet, and suffered mild-to-moderate wounds.

It is worth mentioning that the soldiers also abducted one Palestinian, who crossed the perimeter fence.