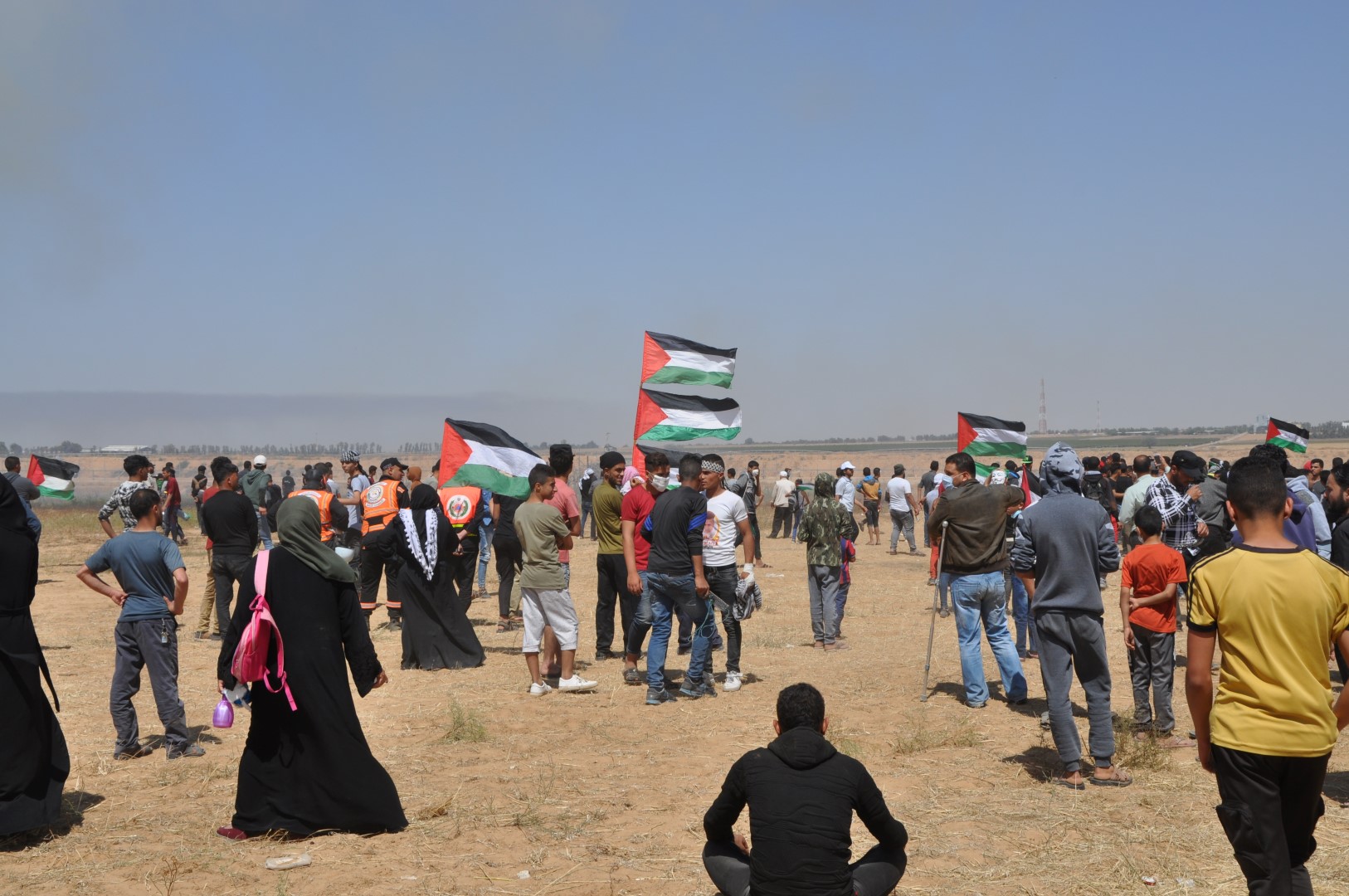 On Wednesday, 15 May 2019, Israeli forces wounded 144 Palestinian civilians, including 49 children, 4 women, and 1 paramedic, in excessive use of force against the peaceful participants in the protests organized in commemoration of the 71st anniversary of the Palestinian Nakba.

Those protests- which were called for by the Supreme National Authority of the Great March of Return and Breaking the Siege under the name of “Millions for Land and Return” in commemoration of the 71st anniversary of the Palestinian Nakba- were preceded by the Israeli forces’ military reinforcements along the border fence with the Gaza Strip, indicating a deliberate intent to use excessive force against the protesters.

PCHR’s fieldworkers monitored the deployment of dozens of Palestinian police officers to control the situation and try to prevent the protesters from approaching the border fence. Meanwhile, the protesters acted in a fully peaceful manner as there were no attempts to burn tires.

However, in very limited incidents, some protesters approached the border fence and tried to throw stones at the fence.

According to PCHR’s fieldworkers, the Israeli forces stationed in prone positions and in their military jeeps along the border fence with Israel continued to use excessive force against the protesters.

They fired live bullets and teargas canisters at the protesters, wounding dozens of them without posing any imminent threat or danger to the soldiers’ life.

The Israeli forces also used skunk water cannons against the protesters, particularly in Khan Younis and eastern al-Boreij, in addition to using drones that fire teargas canisters amid the protesters, who were hundreds of meters away from the border fence.

At approximately 13:00, thousands of civilians, including women, children and entire families, started swarming to the five encampments established by the Supreme National Authority of Great March of Return and Breaking the Siege adjacent to the border fence with Israel in eastern Gaza Strip cities.

Hundreds of protesters, including children and women, gathered adjacent to the border fence with Israel in front of each encampment and its vicinity and protested between tens and hundreds of meters away from the fence.

The protesters chanted slogans, raised flags, and in very limited incidents attempted to approach the border fence and throw stones at the Israeli forces.

The Israeli shooting, which continued until around 18:00, resulted in the injury of 144 Palestinian civilians, including 49 children, 4 women and 1 paramedic, with live and rubber bullets and by being directly hit with teargas canisters.

Meanwhile, dozens of protesters, paramedics, journalists and PCHR’s fieldworkers suffered tear gas inhalation and seizures due to tear gas canisters that were fired by the Israeli forces from the military jeeps, riffles and drones in the eastern Gaza Strip.

The following table shows the number of civilian casualties due to the Israeli forces’ suppression of the Great March of Return since its beginning on 30 March 2018:

PCHR stresses that the Israeli forces should stop using excessive force and respond to the legitimate demands of the protesters, particularly in regard with lifting the closure that is the real solution to end the humanitarian crisis in the Gaza Strip.

Thus, PCHR reiterates its call upon the ICC Prosecutor to open an official investigation in these crimes and to prosecute and hold accountable all those involved in issuing or applying orders within the Israeli forces either at the security or political echelons.

PCHR calls upon Switzerland, in its capacity as the Depository State for the Convention, to demand the High Contracting Parties to convene and ensure Israel’s respect for this Convention, noting that these grave breaches constitute war crimes under Article 147 of the same Convention and Protocol (I) Additional to the Geneva Conventions regarding the guarantee of Palestinian civilians’ right to protection in the occupied territories.